This work takes place under a bilateral Memorandum of Understanding (MOU) originally signed in September 2012 in Tel Aviv between the EPA and the Israel Ministry of Environmental Protection (MOEP).  The MOU was renewed on October 18, 2018, in Washington, D.C. by EPA Administrator Andrew Wheeler and Israeli Ambassador to the United States Ron Dermer to advance bilateral collaboration on scientific and environmental issues of mutual interest. 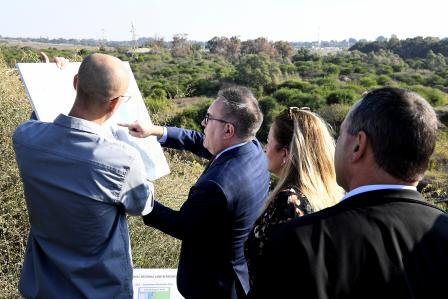 Administrator Wheeler views cleanup progress at the Nof Yam site in Israel.
EPA Administrator Wheeler recently completed a mission to Israel to further EPA's collaboration with Israeli counterparts on promotion of innovation in water, water reuse, remediation of contaminated sites, and other priority areas. The mission included site visits to the Nof Yam Remediation Site and to the SHAFDAN Water Recycling Facility, as well as bilateral meetings with the Minister of Environmental Protection and Minister of Energy, among others. The Administrator also shared U.S environmental priorities at a keynote speech at the Water, Technology and Environmental Control Conference (WATEC), Israel’s premier international water conference; and participated in a roundtable with U.S. and Israeli stakeholders on environmental innovation.
During their meeting, the Administrator and Israeli Minister of Environmental Protection Zeev Elkin announced enhanced work in two areas this upcoming year under our MOU:

Explore Our Activities in Israel 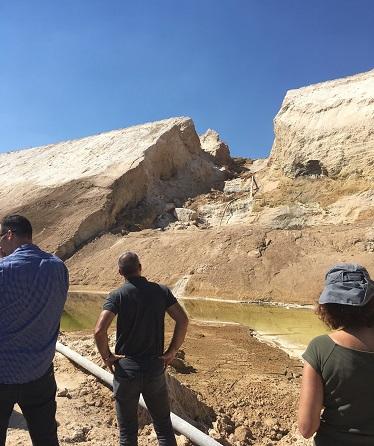 Israel Ministry of Environmental Protection and U.S. EPA personnel at the site of a waste water release from the Rotem Phospho-Gypsum Stack into the Negev Nature Reserve.In a multi-year collaboration with the U.S. Department of Defense and the U.S. Department of Energy, EPA is participating in testing of radiological assessment and clean-up technologies with the Israeli Ministry of Defense.  This collaboration has built on laboratory research to develop radiological preparedness strategies.  In 2016, a joint paper focused on clean-up technology evaluations was published.  Testing continues with a focus on assessment, and further summary reports are planned.

In June 2017, approximately 50 million gallons of waste water were released into the Negev Nature Reserve due to a catastrophic failure of the Rotem Phospho-Gypsum Stack in Israel. At the request of MOEP, EPA has provided technical assistance and advice to the Ministry since the spill occurred. In March 2018, the MOEP met with EPA, the State of Florida and Phosphate Industry Officials to review phosphate industry practices and U.S. regulations, and to share technical information.  EPA continues to provide technical advice to further the MOEP’s development of an Israeli Phosphate regulatory framework.

Clean Up of Contaminated Sites 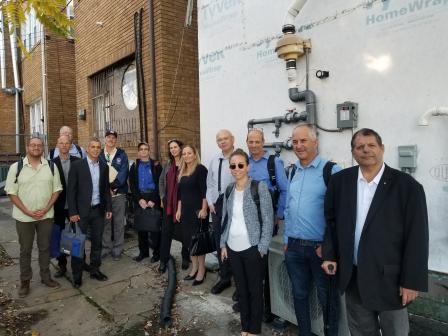 Israeli participants on Study Tour at Vapor Intrusion Clean-Up Site in Washington, DC. (2019)Since 2010, EPA has been collaborating with the MOEP on best practices and policies for site remediation and clean-up technologies to address contaminated sites. EPA and MOEP have shared information on reducing human health and environmental risk from contaminated sites.
Redevelopment of contaminated former military sites for housing is a priority for the Government of Israel.  Israel hopes to identify specific improvements to legal frameworks and specific innovative and cost-effective technologies to advance their contaminated sites clean-up efforts.  This is also a key topic under EPA’s MOU with MOEP. EPA and MOEP are currently working on a review of soil clean-up strategies at formerly-used defense sites.
In October 2019, EPA conducted a contaminated sites study tour for eleven Israeli experts from MOEP.  The group met with regulatory, policy and clean-up technology experts from EPA and the U.S. Department of Defense in Washington, D.C. and conducted site visits in Washington, DC; Hampton Roads, Virginia; Missouri; and Nevada.

EPA’s National Homeland Security Research Center is collaborating with Israel on water security issues, risk assessment and water decontamination. This work is based on the Bilateral Statement of Intent on Security of Water Supply Systems, which expresses the intent of U.S. and Israel to work collaboratively to address present and future water security issues in both countries.

Lead is an extremely dangerous, toxic metal that is poisonous to humans and particularly harmful to children, causing permanently lower IQs and behavioral problems. The global community has made great strides to reduce the dangers of lead around the world by banning lead in gasoline in almost all countries and banning lead in paint in some countries.  However, about 70% of countries still allow lead paint. To address lead paint globally, EPA serves as the Chair of the Global Alliance to Eliminate Lead Paint, a voluntary partnership of governments, industry, and NGO’s to eliminate lead paint around the world. The goal of the Alliance is for all countries to enact laws to eliminate lead paint.

In our role as Chair of the Alliance, EPA has been working  since March 2018 with Israel’s Ministry of Health to establish a legal limit for lead in paint.  In June 2018, the U.S. Embassy in Israel organized a roundtable discussion in Jerusalem on eliminating lead in paint. Representatives from government, industry, and academia attended the meeting and learned about the adverse health effects of lead in children and adults and the importance of eliminating lead in paint. Following that roundtable discussion, the technical committee at the Standards Institution of Israel voted unanimously to restrict the lead concentration in all paints to 90 ppm, by January 1, 2021.

View and print these Documents Related to EPA Collaboration with Israel.

For additional information on EPA's work in Israel, contact: