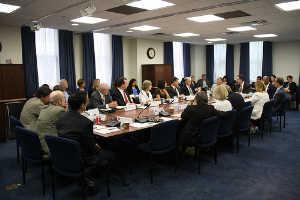 EPA works with the USTR and other government agencies to develop and review environment-related provisions of proposed trade agreements and build the capacity of U.S. trading partners to develop, implement, and enforce sound environmental standards.
By encouraging the implementation of such standards abroad, EPA and USTR aim to:

EPA works with the State Department, trade partners and others to develop projects and programs that implement environmental capacity building activities provided for under trade agreements and can serve as the basis for environmental capacity building, technical assistance and knowledge sharing. These collaborative international efforts increase the effectiveness of U.S. trade agreements and create markets for environmental technology.
For more information on EPA-specific activities, please see the following links:

EPA works with USTR, the President's Council on Environmental Quality and other federal partners to review the effects on the domestic environment that could result from implementation of the agreement.  Executive Order 13141 and its implementing guidelines provide the formal basis for conducting these reviews.
Learn more about:

In 2019, the United States-Mexico-Canada (USMCA) Free Trade Agreement was finalized to update and replace the North American Free Trade Agreement (NAFTA), which itself had been finalized in 1992 and operational as of 1994.  With entry into force on July 1, 2020, and with combined trilateral trade flows of over $1.2 trillion, the USMCA creates the largest free trade area in the world outside of the European Union.

Once the USMCA enters into force and replaces NAFTA and NAAEC on July 1, 2020, EPA will continue to work with a number of the institutions established originally by NAFTA and related agreements to address environmental issues in the North American region.  This includes the mechanism, originally created in the NAAEC, allowing any non-governmental organization or person in any of the three countries to assert that one of the Parties (i.e., the United States, Canada, and Mexico) is failing to enforce its environmental laws.  In addition, EPA will continue to work through the Commission for Environmental Cooperation (CEC) to address regional environmental concerns, help prevent potential trade and environmental conflicts, promote the effective enforcement of environmental law, and to monitor the environmental effects of the USMCA, as well as the North American Development Bank (NADB).

The Trade and Environment Policy Advisory Committee (TEPAC) provides policy advice to the EPA and the Office of the U.S. Trade Representative on issues pertaining to the nexus between the environment and trade. TEPAC is comprised of representatives of non-profit and private sector organizations.
Co-hosted by the U.S. Trade Representative and the EPA Administrator, TEPAC meets twice a year. Members are briefed on environment and trade related issues and can provide input and guidance to the Administration and members of Congress. EPA uses this forum to update, and receive feedback from, TEPAC members on environmental issues of importance.