EPA's Role in the United Nations Economic and Social Council 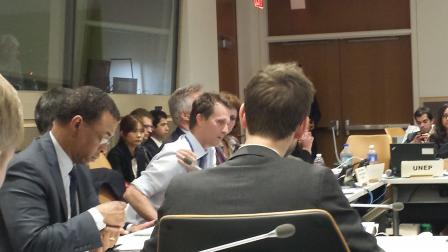 EPA works with United States representatives to the UN on environmental issues discussed by ECOSOC.

The  U.N. charter established the United Nations Economic and Social Council (ECOSOC)  in 1945 as one of the six main bodies of the UN. ECOSOC, based in New York, considers the world’s economic, social, and environmental challenges.  The U.S. Mission to the United Nations serves as the representative to ECOSOC and relies on expertise from agencies, including EPA, on specific issues.

As part of U.S. outreach leading up to Rio+20, and in support of ECOSOC’s sustainable development priority, EPA and partners launched a Youth Sustainability Challenge, Exit which invited youth and young adults to create short videos on what they are doing to promote sustainability. Georgetown Energy, a student group from Georgetown University in Washington, DC, won the overall award with this video.Exit

Established by Chapter X of the Charter of the United Nations Exitin 1946, ECOSOC considers a wide range of issues, including the world’s environmental challenges and how environment and development challenges interlink. ECOSOC has 54 member Governments which are elected for three-year terms by the General Assembly of the UN based on geographical representation.

As part of the effort to address these challenges, the Commission on Sustainable Development (CSD) Exit was created following the June 1992 Rio Earth Summit. The UN General Assembly formally established CSD in 1993 to review progress on commitments made at the Earth Summit, and expanded on this work at the World Summit on Sustainable Development (WSSD) held in Johannesburg, South Africa, in 2002.

In June 2012, nearly fifty thousand people from all levels of government and almost every sector gathered in Rio de Janeiro, Brazil, to prepare for and participate in the United Nations Conference on Sustainable Development Exit(often referred to as Rio+20) and related events. Through this Conference – the largest in United Nations history – the global community elevated the conversation on sustainable development and reached a landmark agreement on its two main themes: the green economy and the institutional framework for sustainable development.

The SDGs were adopted by the UN general assembly in September 2015 and came into force on January 1st 2016. To fund work on the SDGs, a new global framework for financing sustainable development was created under the Addis Ababa Action Agenda.  Countries agreed to this agenda in July 2015 at the Third International Conference on Financing for Development. The agenda provides foundational support for the implementation of the 2030 Agenda by aligning financing flows and policies with economic, social and environmental priorities.

EPA has played a role in ECOSOC’s sustainable development activities by advancing knowledge for enhancing sustainability and through substantive programs that contribute to sustainable development outcomes. At the Commission on Sustinable Development (CSD), EPA took a leading role in negotiating policy options in five key thematic areas, in addition to participating in multi-stakeholder dialogues. At its last meetings, the Commission negotiated policy recommendations in five thematic areas:

Ahead of Rio+20, EPA engaged actively in the United States government preparations for the Conference, in partnership with a range of U.S. agencies, led by the State Department, and the stakeholder community. Besides EPA’s important role in negotiations and advancing multi-stakeholder participation at Rio+20, the Agency hosted a range of side events and promoted several key programs. These included practical examples of how to achieve environmentally beneficial and socially inclusive economic growth, such as:

Some of the major outcomes of Rio+20 that EPA supported to advance the international conversation on sustainable development include:

Rio+20 also led to the establishment of an inclusive, intergovernmental process to set Sustainable Development Goals (SDGs) Exit to create measurable goals for a sustainable, coordinated, coherent post-2015 development agenda, in cooperation with the Post-2015 process on the MDGs. EPA is engaging in this process with a particular view toward ensuring that protecting human health and the environment are priorities for the future development agenda.

Links related to ECOSOC and Rio+20

Explore all of EPA's Partnering with International Organizations