The Partnership for Clean Fuels and Vehicles (PCFV) is a global public-private partnership working with developing and transitional countries to reduce air pollution from vehicles through the promotion of cleaner fuels and vehicles.

EPA was a charter member of the Partnership, which began its work in 2002 and now includes 73 partners. The partnership kicked off its international cooperation with a focus on the promotion of unleaded fuels. Exit The PCFV helped achieve great success with the use of leaded gasoline being virtually eliminated, with only two countries still using any leaded gasoline as of 2019. Exit

The phaseout of lead from gasoline globally has resulted in economic benefits from the prevention of lead exposure in children everywhere. [Reference:  Peter L. Tsai and Thomas H. Hatfield. “Global Benefits From the Phaseout of Leaded Fuel.” Journal of Environmental Health. 74: 8-14. 2011.]

Beginning in 2008, the PCFV’s second focus area has been to reduce sulfur in fuels.  At that time, few developing countries had low sulfur fuel policies.  Since 2009, the PCFV has helped more than 20 countries – whose populations total over 1.7 billion – implement low sulfur diesel fuel standards (50 ppm or below).  This effort has significantly reduced sulfur dioxides and particulate matter, both of which have significant impacts on human health.

Most recently, the PCFV has launched a third campaign – the vehicles campaign – recognizing that governments that have been successful in securing cleaner fuels will achieve greater environmental and health impacts by combining cleaner fuels with cleaner vehicles that take advantage of innovative emission control technologies.

The PCFV engages governments and stakeholders in developing countries:

A large percentage of vehicle fleets in developing and transition countries are imported used or second-hand vehicles, and demand for vehicles in these countries has grown significantly. Imported vehicles can be much cleaner and efficient. The report outlines potential strategies to improve used vehicle fleets, which can have a wide range of benefits including reducing pollution.

The Partnership for Clean Fuels and Vehicles (PCFV) has been working with developing and transitional countries to reduce vehicular air pollution through the promotion of cleaner fuels and vehicles. With support from EPA and Environment Canada, the PCFV created a regulatory toolkit to introduce the need for a systems approach to vehicle emission reduction. A systems approach matches fuels and vehicle improvements - to move towards tighter vehicle emissions regulations.

To promote low sulfur fuels and the introduction of cleaner vehicles, PCFV developed a Toolkit for Clean Fleet Strategy Development Exit to assist vehicle fleet managers to assess the air quality impact of their fleets. The PCFV also provides training on this toolkit and has delivered trainings in Asia Pacific, Central and Eastern Europe, and Latin America and the Caribbean. 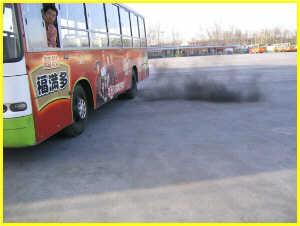 Bus exhaust in China. Source: Southwest Research Institute
The training prepares public and private on-road vehicle fleet managers to:
1. evaluate the impacts of their fleets on the environment and human health, and then
2. develop a practical strategy for corrective and cost-effective action.

From 2010-2016, EPA worked with Indonesia to develop cost-benefit analyses to promote government fiscal policies, to create and foster dialogue amongst a cross-government and industry stakeholders group, and to engage the government-owned petroleum company Pertamina. As a result of this work, Indonesia plans to introduce low sulfur fuels that meet the PCFV target of 50 ppm.

Since the launch of the Partnership for Clean Fuels and Vehicles Lead Campaign in 2002, nearly all of the 100-plus countries using leaded fuel at that time have eliminated lead from their fuel supplies. As a result, the Lead Campaign for the PCFV is considered to have been successfully completed. In follow up to this success, EPA sponsored a third party evaluation in 2011 to identify and examine lessons and design principles for successful partnership that may apply to other existing or future international partnerships.

The evaluators found four factors which supported a strong start and successful implementation of the Campaign:
1. preceding developments, such as known public health impacts for lead and existing momentum for change;
2. a timely opportunity with support from senior leaders;
3. a clear, measurable, and ambitious-yet-achievable goal; and
4. strong partnership design and design process that fosters ownership and trust.

In 2010, UNEP’s Evaluation Office commissioned an independent evaluation of the contribution of the PCFV to the phase out of leaded gasoline in Sub Saharan Africa (SSA), some 48 countries.
The evaluation made the following findings:
Resources: