Tools for Your Community

Water Safety Plans (WSP) were introduced by the World Health Organization (WHO) in the 3rd edition of the Guidelines for Drinking Water Quality (2004), Exit as a health-based, risk assessment approach to managing drinking water quality that:

EPA’s WSP efforts began in Latin American and the Caribbean.  In response to the devastation from Hurricane Mitch (October 1998), the US Environmental Protection Agency (EPA) began work addressing drinking water issues in Central America. The hurricane had caused severe damage to the region.  The four components of EPA’s Hurricane Mitch activities were: 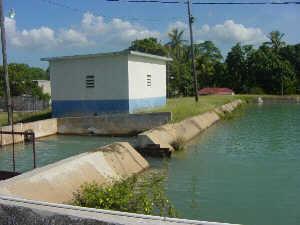 Intake at Spanish Town Treatment Plant in Spanish Town, Jamaica. 2006.
Following visits to El Salvador, Nicaragua and El Salvador, EPA developed EPA’s Safe Drinking Water Program in Central America, to address the negative health effects from poor drinking water quality affecting the population. The plan focused on achieving improvements in drinking water quality by improving the capacity of institutions (particularly the water utilities and the ministries of health) which are responsible for providing safe drinking water in targeted rural and key urban/periurban areas in El Salvador, Nicaragua and Honduras.
EPA's key partner in these efforts was the Pan American Health Organization (PAHO) Exit which provided training and expertise to the affected countries through its technical center in Lima, Peru.

An initial demonstration WSP was piloted in Spanish Town, Jamaica in 2006, in partnership with the US Centers for Disease Control (CDC) and the Pan American Health Organization (PAHO). Subsequently, other nations in Latin America and Central America including Brazil, Bolivia, Honduras, Costa Rica and Guyana all began developing WSPs, either on their own or with support from PAHO, CDC, and EPA.

Subsequent WSPs supported by EPA took place in India and in Africa through a partnership with the International Water Association (IWA) Exit, the World Health Organization (WHO) Exit, United Nations-Habitat Exitand other urban water utilities in East Africa.

Poor sanitation, unsafe water and unhygienic environments are a leading cause of illness and death among children in Sub-Saharan Africa. EPA worked to improve public health through increasing the capacity of urban providers in Sub-Saharan Africa to deliver safe drinking water in a sustainable way from watershed to tap, through the development and implementation of Water Safety Plans (WSPs).

The goal of the East Africa Water Safety Plan program was to establish a sound basis for scaling-up WSP implementation across the Africa region by creating long-term supporting mechanisms to ensure that a significant proportion of urban populations in the African continent are consistently supplied with safe drinking water. Project elements included:

WHO currently supports WSPs in the region.