Transportation of goods across air, sea and land presents economic opportunities and also creates significant environmental challenges, including from criteria air pollutants and greenhouse gases. EPA is working with our international partners to reduce the environmental impacts of rapidly increasing international trade.

Growth of International Trade and Transportation

The trade of goods among the world’s economies is not new.  However, in recent decades international trade has grown to unprecedented levels as a consequence of profound transformations in global patterns of manufacturing, transportation and related forms of economic activity.  This evolving interconnectedness of global economic activity is reflected in the increasing share of national Gross Domestic Product (GDP) that is based on international trade in merchandise, as shown below in data from the World Bank's World Development Indicators 2017 Database.

In general, the demand for international transport services is driven by global population and economic growth and the consequent need to carry raw materials and intermediate and finished products between centers of production and consumption. 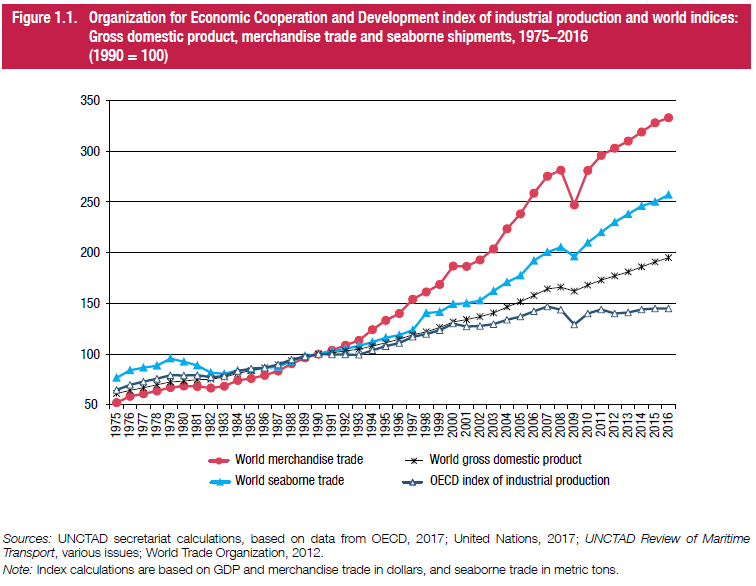 The figure to the right illustrates both the close correlation and the evolving relationship among economic growth, industrial activity, merchandise trade and maritime cargo transport during the period 1975-2016.  Several changes during this time are noteworthy, including:

In 2015 the International Transport Forum (ITF) projected that trade patterns will continue to shift geographically and that, therefore, global freight transport volumes will more than quadruple by 2050. Although more recent estimates may show a somewhat lower projection of the growth in global freight transport volumes, all projections show a continuation of the geographical shift in activity patterns.

The next two illustrations show the scale and distribution of modern global shipping activity.  Images of this nature now are available from various public websites, typically derived from satellite tracking of vessels.  The next two images are from the ShipMap visual representation of calendar year 2012 global shipping activity data, as created by UCL and Kiln from the data used for the Third IMO GHG Study.  Beyond showing the ubiquity of vessel traffic overall, the first illustration reveals key patterns and concentrations in the major types of vessels used to carry cargo .  The lines in yellow refer to container ships, which increasingly carry more and more cargo that previously would have been carried, for example, in a bulk carrier.  Dry bulk ships are shown in blue.  Tankers (e.g. for oil) are in red.  Gas bulk tankers are in green, and vehicle carriers are in magenta.

The second illustration shows global container ship traffic, and highlights the degree to which container ship traffic is driven by, and facilitates, the economic emergence of developing countries, particularly in Asia.  The International Transport Forum stated in 2015 that “Expansion in Asia continues to determine global trade patterns, with intra-Asia containerized cargo flows now being more substantial than Asia-Europe and Asia-US flows together.” 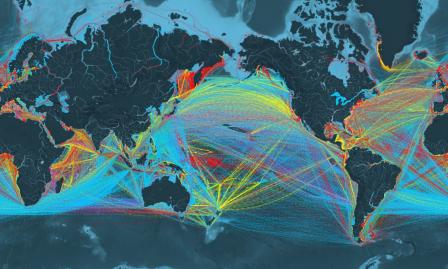 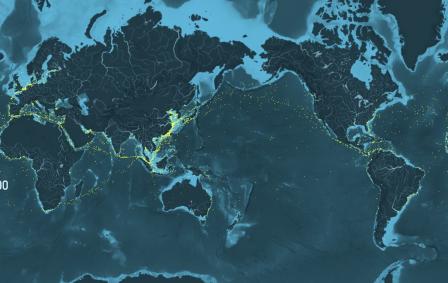 The next illustration (below) shows the growth in tons of cargo transported by maritime shipping.  From 1980 to 2017, international seaborne trade, measured in millions of tons of cargo loaded, grew 265 percent.  Containerized shipping, represented by the uppermost portion of each bar representing cargo volume in a particular year, experienced particularly dramatic growth, both in absolute quantities and in relation to the cargo volumes carried in other types of ships. 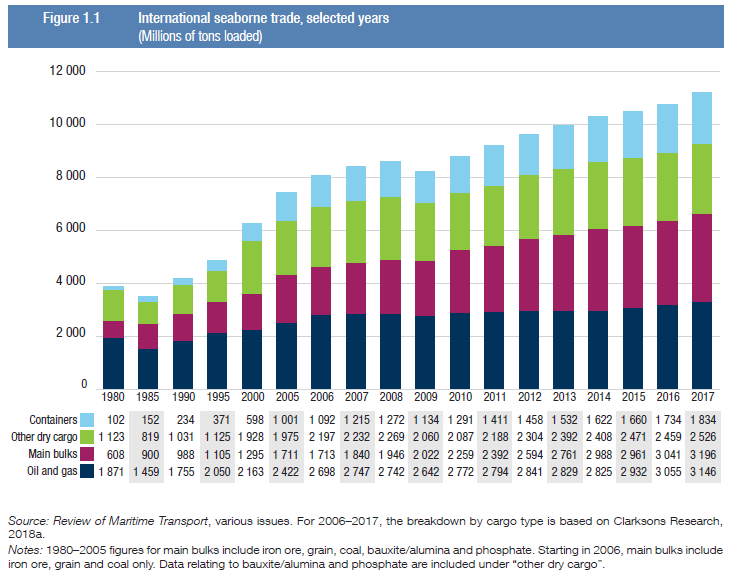 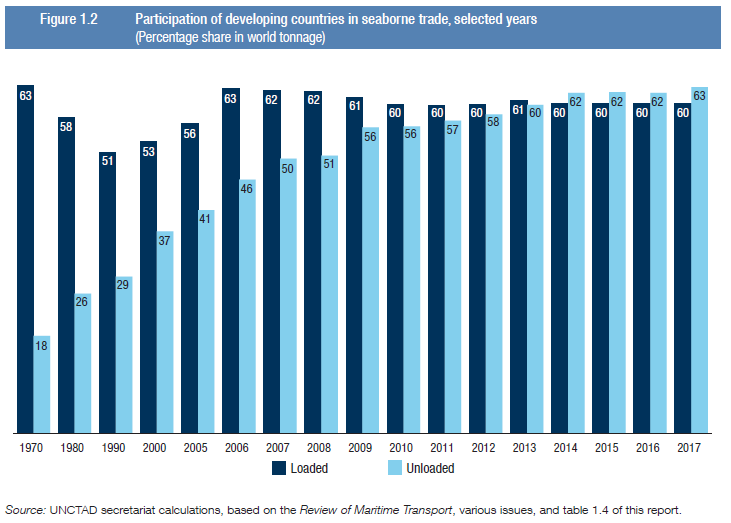 According to the International Transport Forum, “The traditional trade routes between developed economies will grow relatively slowly, whereas the growth of the trade corridors connecting emerging economies will average 17% annually.  By 2050, the transport corridor between the United States and Asia will be subject to the highest flow of goods in both directions.  By 2030, the North Pacific corridor will surpass the North Atlantic as the main freight corridor. Significant growth will also take place in the Indian Ocean and Mediterranean and Caspian Sea corridors.” 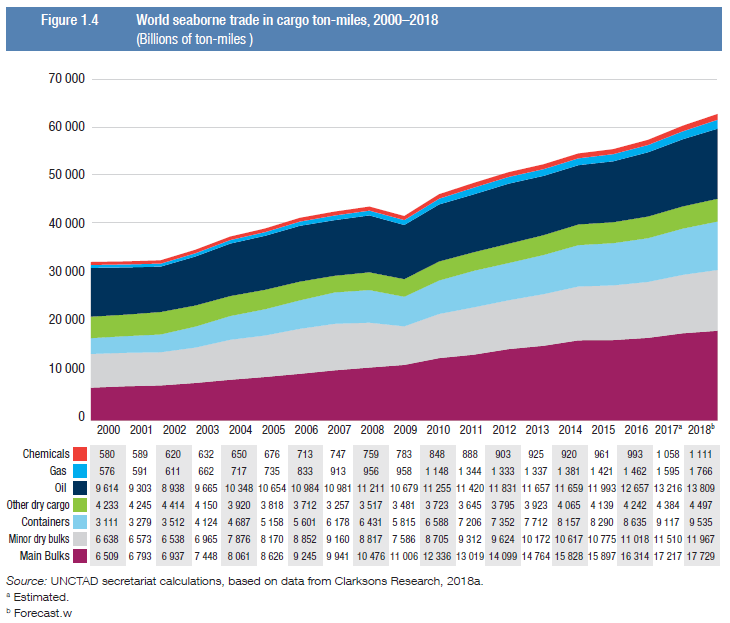 The next illustration (right) shows that world seaborne trade, measured in cargo ton-miles, almost doubled during the 2000 – 2018 time period.  Given the developments in global trade patterns noted above, this is no surprise.  With more countries—particularly those with emerging economies—participating in global trade, more cargo is being transported across greater distances.  It is worth noting that containerized shipping tripled during this time period, compared to the more modest—but still significant—growth in cargo ton-miles for the other types of ships. The different colored segments shown on this chart reflect the main types of cargo in the data table below the chart.  To illustrate, the third segment up from the bottom of the chart represents the growth in cargo ton-miles carried by container ships.

When goods are traded internationally, they can be moved over water, air or land. The transport choice depends on such factors as the geographic proximity of the trading partners, characteristics of the product to be transported, the relative costs of competing transport modes, and other key facilitating services such as communications.

Because of their reliance on petroleum-based fuels and their dramatic growth rates in recent decades, air and sea transport are responsible for significant emissions of traditional (criteria) air pollutants (e.g. sulfur oxides (SOx), nitrogen oxides (NOx)) and greenhouse gases such as carbon dioxide (CO2) and other pollutants. The most recent estimate of air pollutant emissions from international shipping comes from the Third IMO GHG Study 2014. This study provided an analysis of emissions during the 2007-2012 time period, as well as projections out to 2050. The IMO will initiate work on its fourth GHG study in 2019 and the final report is due in the autumn of 2020.

The IMO found that international shipping contributes about 13% and 12% of annual global NOx and SOx emissions, respectively, from anthropogenic sources reported in the latest IPCC Assessment Report (AR5).  This sector contributed an average of 2.6% of global annual CO2 emissions from the combustion of fossil fuels during the period 2007 – 2012.  (The figure for 2012 was 2.2%.)  The IMO also found that shipping CO2 emissions are projected to increase by 50% to 250% in the period to 2050, despite fleet average efficiency improvements of about 40%, because of the expected growth in shipping activity.  Compared to other transport modes, international aviation and shipping have fewer options for transitioning to other, cleaner fuels in the near- to medium-term, but the IMO’s release in 2018 of ship and port emission toolkits highlights some promising developments in alternative fuels and efficiency measures.  By contrast, even with anticipated growth in shipping activity, international shipping’s contribution to global NOx and SOx emissions is expected to grow more slowly because of the application of binding IMO standards on marine fuel sulfur content, NOx emission controls for engines, and other measures.

EPA, industry and other entities in the U.S. and abroad have taken many regulatory and voluntary steps to reduce domestic emissions from maritime shipping and aviation.  These efforts have resulted in some emissions reductions here and abroad.  However, because of the very nature of these transportation modes (operating largely outside of national boundaries), domestic actions alone cannot control the energy consumption of, or emissions from, these sectors.

Reducing traditional “criteria” air pollutants (e.g. NOx, SOx, PM): Working internationally, the U.S. and other countries have established stringent marine fuel quality and engine emissions standards under the auspices of Annex VI of the IMO’s International Convention for the Prevention of Pollution from Ships (MARPOL).  By acting through the IMO, the specialized agency for maritime affairs within the United Nations system, we have achieved important reductions in maritime emissions of criteria air pollutants, while avoiding distortions or disruptions of international trade patterns.

In addition, through ongoing, joint work with EPA, the Mexican government has been actively exploring international actions to reduce air pollution from ships near local communities.  Learn more about our Collaboration with Mexico to Reduce Emissions from Ships.

Reducing greenhouse gas emissions (GHGs) and saving energy: In recent decades, industry and government have managed to improve the energy efficiency of ships and airplanes to a considerable degree.  This has been driven by many factors, including the improvements in efficiencies of scale associated with the increasing size/capacity of ships and airplanes, engine and navigational routing improvements, and a desire to address higher fuel prices.  Governmental entities and key industry players have been working on this via internal development of new technologies, voluntary partnerships, and coordinated action undertaken in the technical agencies responsible for international maritime and aviation matters within the United Nations system: the IMO and the International Civil Aviation Organization (ICAO).  There remains considerable potential for using technical and operational measures to further reduce energy consumption (and thus, emissions) from both ships and airplanes.

References cited on this page: