U.S. EPA recommends that recreational fishermen, shell fishermen and everyone else follow the Massachusetts regulations. In addition, we recommend limited eating of certain species not covered by the 1979 state regulations.

*Please see below for information on species specific information and recommendations for sensitive groups -- pregnant women, nursing mothers, children under age 12 and women who may become pregnant. 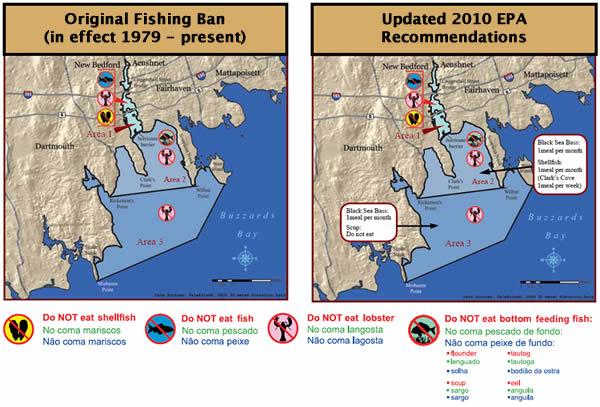 The Massachusetts Department of Public Health (MDPH) has also had extensive involvement with NBH in order to address a variety of health concerns. In 1979, MDPH promulgated state regulations prohibiting the consumption of any fish/shellfish in Area 1 of NBH; of bottom feeding fish (eel, scup, flounder, and tautog) or lobster in Area 2; and lobster in Area 3 (see attached map). These early efforts were followed by human epidemiological studies of PCB exposure via fish consumption by MDPH and others. *MDPH has additional advice for sensitive populations (pregnant women, nursing mothers, children under age 12, women who may become pregnant) that can be found at www.mass.gov/eohhs/gov/departments/dph/programs/environmental-health/exposure-topics/fish-wildlife/fish/ Exit. EPA supports this additional advice, and notes that its updated risk assessment (discussed below) recommends that sensitive populations avoid fish, shellfish and lobster from the three closure areas in NBH (see map on reverse) except that shellfish from Area 3 and Clark's cove may safely be consumed by these sensitive populations if limited to one meal per month.

As part of the Superfund process, EPA is required to conduct risk assessments that will result in cleanup levels that the selected remedy for a given site must meet. These risk assessments use conservative (health-protective) assumptions to ensure that even sensitive populations will not have health concerns following completion of remediation activities. In the case of NBH and the risk assessment conducted on fish/shellfish in the closed areas of the harbor, EPA's updated evaluation indicates that some species not currently covered by the 1979 state regulations may present health concerns for recreational fishermen and shell fishermen (and/or their families/friends who consume their take) if these species are consumed in larger quantities than current epidemiological data suggest. EPA believes it is important that recreational fishermen and shell-fishermen be aware that the risk assessment suggests that: consumption of black sea bass be limited to one meal per month if they are obtained in Areas 2 and 3; that scup not be consumed from Areas 2 or 3; and that general guidelines for shellfish include limiting consumption to one meal a month in Area 2 (one meal per week in Clark's Cove). See map above for a summary of EPA's recommendations.

It is important to recognize the substantial benefits of fish consumption for everyone. Fish is one of the best sources of fatty acids which are helpful in reducing the risk of heart disease. In order to avoid exposure to a harmful level of contaminants, people should choose a variety of fish and shellfish from a variety of sources.

The tables on this page show Massachusetts regulations and U.S. EPA recommendations for eating fish, shellfish and lobster caught in three fish closure areas around New Bedford Harbor. In two of the three closure areas, we have different advice for sensitive populations -- pregnant women, nursing mothers, children under age 12, and women who may become pregnant -- than for the general population. This special advice is noted at the bottom of the tables for Areas 2 and 3. Safe seafood is an important part of a healthy diet. People should choose a variety of fish and shellfish from a variety of sources. 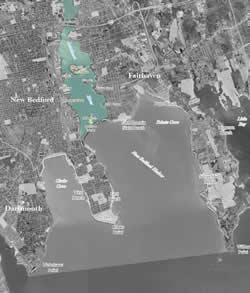 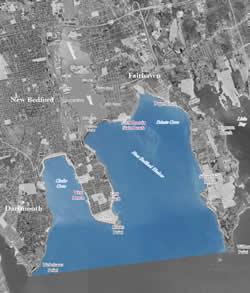 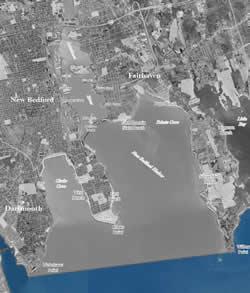