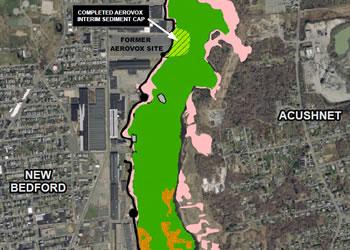 You may need a PDF reader to view some of the files on this page. See EPA’s About PDF page to learn more.
On this page:

The 18,000-acre New Bedford site is an urban tidal estuary with sediments which are highly contaminated with polychlorinated biphenyls (PCBs) and heavy metals. At least two manufacturers in the area used PCBs while producing electric devices from the 1940 to the late 1970s. These facilities discharged industrial wastes containing PCBs directly into the harbor and indirectly through the city sewer system. This stopped when the manufacture of PCBs was banned by EPA. As a result, the harbor was contaminated with PCBs in varying degrees for at least 6 miles from the upper Acushnet River into Buzzards Bay. Over 100,000 people live within 3 miles of the site.This site is being addressed in four stages: initial actions and three long-term remedial phases focusing on the hot spot area, the upper and lower harbor areas, and the outer harbor Buzzards Bay area.Bioaccumulation of PCBs within the marine food chain has resulted in closing certain areas areas to lobstering, shellfishing, and fishing; in other areas the frequency of fish and shellfish meals are subject to advisories. Since 1982, signs warning the public of the presence of PCBs in the harbor have been in place and maintenance and replacement of these continue as needed.

What progress is being made?

When the cleanup began, the areas with the highest levels of PCBs were addressed first. A 5-acre northern portion of the Acushnet River estuary was identified as the "hot spot" area (about 14,000 yd3 of sediment exceeding a concentration of about 4,000 mg/kg total PCB) and was addressed prior to the start of the full scale dredging in the upper and lower harbor. This cleanup took place from 1994 to 1995 and the off-site disposal of the resulting highly contaminated material was completed in 2000.

An annual program of full scale subtidal dredging was conducted starting in 2004 with about $15M in annual funds provided by EPA's Superfund program throughout the Upper Harbor, north of the Coggeshall Street Bridge.

In 2013, additional funding for the cleanup was secured under a $366.25 million settlement reached with a major responsible party. The settlement made acceleration in pace of the cleanup possible, starting in 2014.

Approximately 600,000 cubic yards of PCB-contaminated sediment from the Upper Harbor was dredged and disposed off-site in a licensed PCB landfill. This portion of the cleanup was completed in 2019. About 388,000 cubic yards of PCB contaminated sediment from the Lower Harbor and lower portion of the Upper Harbor was dredged followed by disposal in the Lower Harbor CAD Cell. This operation was completed between 2016 and March 2020.

In total, over several decades, about 1 million cubic yards of PCB contaminated material was dredged from the Harbor by the Superfund program.

The highly contaminated Aerovox former mill on Belleville Avenue in New Bedford is being addressed under the Massachusetts Chapter 21E site cleanup program. EPA has constructed an interim sediment cap in a 3 acre area abutting the Aerovox facility to the east, as shown on the attached map. Construction of the interim sediment cap in 2018-2019 allowed EPA's final pass dredging to proceed ahead of the ongoing state Aerovox site cleanup which was still at a preliminary stage. The interim sediment cap will prevent underlying PCBs (polychlorinated biphenyls) and VOCs (volatile organic compounds, i.e., solvents) from the Aerovox Site from re-contaminating the newly dredged adjacent river sediments in the Harbor. Once complete source control is achieved at the Aerovox site via the state 21 E program, the interim sediment cap and underlying contaminated sediments can be removed pursuant to the 1998 Record of Decision for the New Bedford Harbor Superfund Site.

In very limited areas of the Upper Harbor it was not feasible or cost effective to address the remaining contamination with dredging, due to extensive amounts of debris as well as abutting bridge embankments. Instead EPA and the Army Corps of Engineers installed seven multi-layer sediment caps in such areas in 2020. These seven cap locations are shown in red on the attached map. EPA intends to issue a future remedial decision document regarding the permanence of the cover/caps. These underwater barriers consist of 2 layers; the bottom layer consists of approximately 24 inches of high-organic silty sand which is designed to permanently sequester the PCB contaminated sediment below. The silty sand layer will be covered by a rocky armoring layer approximately 12 inches thick. The armoring layer will serve to protect the silty sand layer below. Periodic bathymetric surveys will be conducted to ensure the integrity of the subaqueous cover/caps.

Through 2020, EPA funded the removal of about 54,000 cubic yards of sediments from the shoreline (intertidal cleanup), followed by disposal off-site. Remediated saltmarsh areas in EZ1 and WZ1 that were not replanted in 2020 will be replanted during the Spring of 2021.

The next step after this work is completed is more intertidal clean up in the Upper Harbor. This cleanup will take place in the upcoming years as funding becomes available from the Superfund program.

How did EPA conduct the dredging work?

A hybrid, or full-scale dredging process, removed contaminated sediment from the harbor bottom by a system of dredges, pipelines and processing facilities. This system was utilized to address highly contaminated sediments in the Upper Harbor, above Coggeshall Street. Before areas were dredged, any large debris such as tires, mounds of bricks, etc were removed from the harbor bottom to avoid any damage to the equipment. Once the areas were cleared, a highly accurate dredge bucket collected contaminated sediment, and then transfered the resulting mix of water and sediment through an underwater pipeline to EPA's de-sanding facility Exit on Sawyer Street in New Bedford. The coarse sand and shells were filtered from the sediment and silt that contain most of the PCB contamination. The filtered coarse material was temporarily stored and tested at Sawyer Street before it was sent to an off-site, licensed disposal facility. The remaining silt and water was pumped 1.4 miles south to EPA's de-watering facility Exit, where large filter presses squeezed water from the silt. EPA treated the water Exit to strict water quality standards before it was released back into the harbor, while the dewatered sediment was safely transported to a licensed PCB landfill in Michigan. 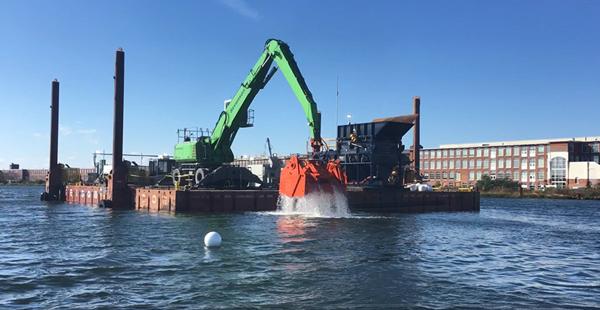 A hybrid dredge prepares to place highly contaminated sediment removed from the Upper Harbor to a slurry tank, from which the material was pumped for desanding, dewatering, and eventual disposal in a secure off-site landfill.

A second process was used for less contaminated sediment found in the Lower Harbor (below Coggeshall Street) and in the more southern part of the Upper Harbor (above Coggeshall Street). Contaminated sediment, generally containing less than an average of 100 mg/kg of PCBs, were dredged with a mechanical bucket, loaded into a scow, dewatered, and placed in the Lower Harbor Confined Aquatic Disposal Cell (LHCC). The LHCC is an underwater containment cell constructed for the project in the harbor floor. The contaminated sediment is held in place by existing clean sediments on the sides and bottom of the cell, and a cap on the top which is installed after the sediment has had the opportunity to consolidate in the CAD Cell. CAD cells have been used successfully for contaminated navigational sediments in New Bedford as well as many other ports and waterways including Boston and Providence. 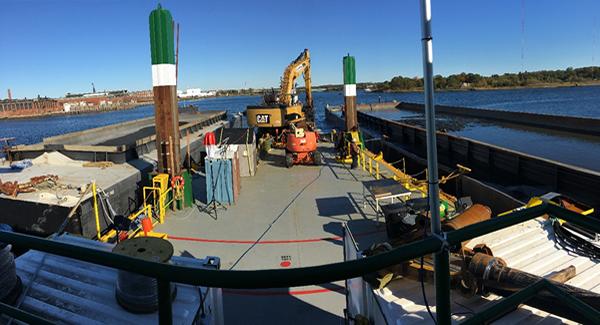 A precision mechanical dredging bucket filling a scow with contaminated sediment in the Lower Harbor during the fall of 2017 prior to dewatering and placement in the LHCC.

During 2021 the following construction/remediation work is planned:

During 2020 the following construction work was completed:

How much longer will this cleanup take?

The focus of cleanup in the Upper Harbor shifts towards the shoreline going forward. This shoreline remediation will proceed north to south on both sides of the river, beginning at the eastern shoreline in Acushnet, closest to the Wood Street/Slocum Street Bridge. After shoreline soils/sediments above cleanup levels have been removed for disposal, the excavated areas will be backfilled with clean topsoil and replanted as saltmarsh. Other cleanup work that is needed going forward includes demobilization of cleanup equipment, facilities and personnel; disposal off-site of temporarily stored contaminated sediment currently at the 103 Sawyer Street facility, assessment of the Interim Aerovox Cap, and capping of the Lower Harbor CAD Cell.

Enormous cleanup progress has been made with the proceeds that were secured from the 2013, $366.25 million settlement. The specific timing of remaining cleanup activities will depend on funding levels available to the project year by year.