This page contains documents which are of historic interest but no longer considered current.

You may need a PDF reader to view some of the files on this page. See EPA's About PDF page to learn more.

EPA collects additional information about sediment that may move through the water from natural events such as currents and tidal flow, or man-made activity such as boating or dredging. When the sediment settles back down on the harbor bottom it can be trapped and monitored to determine its amount and potential concentration of PCBs. Sediment trap samples are collected during active dredging periods and during the de-mobilization of dredge-related equipment. 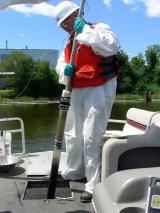 Collecting sediment samples with a push core sampler.
View a larger version of this image.Sediment samples are collected before, during and after each cleanup season as one of the fundamental ways to track the progress and final results of the dredging operations. Environmental scientists study the sediment samples to identify the concentration of PCBs or other contaminants in the sediment. These samples provide vital information for EPA to determine extent of cleanup success and develop the dredge plan for the upcoming year.

The former Aerovox facility was the primary source of PCBs discharged to the Acushnet River and New Bedford Harbor. In 2012, twelve sediment/soil borings were advanced to bedrock in the near-shore area adjacent to the former Aerovox facility to obtain a vertical profile of remaining PCBs and select solvents in and under the marine sediment. The 2012 boring program provided an updated examination of the near-shore sediment contamination in New Bedford Harbor, abutting the Aerovox Site. The results of this boring program will be used in the design and scheduling of further dredging along the shoreline as part of the overall remediation of the New Bedford Harbor Superfund Site.

Annual dredge reports were generated by the project team to provide documentation of the key activities performed and the progress achieved at the New Bedford Harbor site between 2004-2015 when work accelerated with funding provided by the 2013 cash out settlement with a major responsible party. These reports, sometimes called After Action Reports, are generated after a dredging cycle has been completed. Below are the reports from harbor dredge seasons since 2004 as well as reports from the hot spot dredging in 1997, north of Wood Street dredging in 2002 and north lobe dredging in 2005.

Starting in late 2009, EPA initiated a Remedial Investigation (RI) of approximately 17,000 acres located south of the hurricane barrier, known as the outer harbor. The RI includes field sampling activities to determine the nature and extent of contamination, a risk assessment, a review of technologies and range of response actions to address any risk found. The RI for the outer harbor has been completed and resulted in an explanation of significant differences (ESD6) (PDF) (9 pp, 728 K). EPA will continue to keep the public informed about the progress of the outer harbor study at the monthly public meetings.

The EPA's original 1990 remedy for the hot spot area included dredging and on-site incineration of those PCB-contaminated sediments above 4,000 ppm. Due to a vehement and congressionally-supported reversal of local support for incineration, EPA elected to postpone the incineration component of the hot spot remedy and explore alternative treatment approaches. Dredging of the 14,000 cubic yards of sediment from the 5 acre hot spot areas was accomplished from April 1994 to September 1995, with the dredged sediment temporarily stored in a lined and covered holding pond. Seawater removed from the sediments during dredging was treated on site. Pilot studies of solidification and chemical destruction technologies were completed in the fall of 1996, and a feasibility study of alternative remedial approaches was issued in December 1997. EPA issued an Amended Record of Decision (ROD) in April 1999 which included dewatering and off-site landfill disposal as the final component for the hot spot remediation. Transportation of the hot spot sediment to an offsite TSCA permitted landfill started in December 1999 and was completed in May 2000.

Air Data Results During the Demolition

The results were measured in micrograms of particle per cubic meter and were shown alongside the meteorological (MET) results for the average wind speed and direction.

Below is a chart that explains the color coding system for the work day messages that were made available to the surrounding communities.

Key to Air Monitoring Results - What the Data Meant

*Does not reflect the actual timeline, the demolition was completed ahead of the original, anticipated schedule.

It will be difficult to see the early progress as work takes place inside the building. Work crews must first remove interior material and debris and safely decommission utilities which will take several months to complete. Dismantling of the exterior structure of the building is expected to begin fall of 2011.

All exterior and interior building material and debris will be disposed off-site at appropriately licensed landfills; the building foundation will remain on-site under a protective cap. Once the demolition and capping work is completed, the State Chapter 21-E cleanup program begins.