Between 2008 and 2011, 23 new species were identified as threatened or of concern, representing the greatest increase since the list was first established in 2002.

Many marine species of birds, fish, mammals, reptiles, and invertebrates (insects, worms, crabs, clams, etc.) have experienced serious declines and are at risk or vulnerable to extinction.

These species depend on the Salish Sea marine ecosystem for all or parts of their life history, such as reproduction, migration, molting, foraging or over-wintering habitat.

As of January 2011, 113 marine species and sub-species were formally listed as being at risk or vulnerable to extinction, including:

172 species of birds and 37 mammals use the Salish Sea marine ecosystem for some part of their life cycle.

Nearly 50% of these birds and 80% of the mammals depend on it for food or habitat, and many of those (30% of birds and 38% of mammals) are already listed as either threatened, endangered or are candidates for these designations.

Without stronger efforts to improve habitat, the population of these species will likely continue to decline and new species will be added to the list. 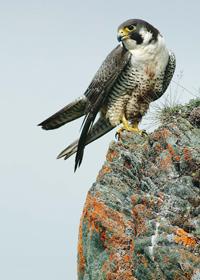 Many birds, like this Peregrine falcon, and other marine animals have experienced serious declines in the Salish Sea. Photo courtesy of Gordon Court.

Many factors can play a role in loss of biodiversity, including:

Overfishing, for example, plays a leading role in the decline of vulnerable fish populations such as rockfish and invertebrate species such as Northern Abalone.

Declines in marine birds can be linked to changes in availability of food sources such as Pacific herring, Pacific sardine, and surf smelt. In turn, a key threat to these food sources is the loss of spawning habitat such as kelp and eelgrass beds which can be impacted by changes to the natural shoreline.

Derelict fishing gear (such as lost or abandoned fishing nets) also poses a threat to marine birds which can easily become entangled and drown.