Marine dissolved oxygen is showing a long term decline in the waters of Puget Sound and in the deeper waters of Georgia Strait. Marine Water Condition Index scores also have been in general decline over the past ten years for many areas in Puget Sound.

Water quality is the foundation for all plants and animals that depend on the Salish Sea – from algae to fish to marine mammals.

Water quality also affects people. It affects us directly when we go to the beach, fish, or dig clams, and indirectly as we enjoy the wildlife and scenery of the area.

This indicator summarizes trends in the amount of dissolved oxygen

dissolved oxygenOxygen that is freely available in water to sustain the lives of fish and other aquatic organisms.  as a measure of the overall quality of the marine waters in the Salish Sea.

When dissolved oxygen is low, it means there's less oxygen available in the water to support aquatic life.

Dissolved oxygen levels in the Salish Sea have naturally risen and fallen over the past 400 years. We don't know whether the current decline is human-caused or not, but we do know it's making aquatic life more vulnerable to pollution and other impacts from people.

Scientists use the term hypoxia to describe water conditions in which there's not enough oxygen to support aquatic organisms.

Fish, crabs, and other marine animals need oxygen to survive. As oxygen levels decrease, these animals respond by changing their behavior to maintain their oxygen intake, such as moving to areas with greater oxygen levels, feeding less, and swimming less.

If oxygen levels get too low, fish and other animals may die - sometimes resulting in widespread "fish kills." 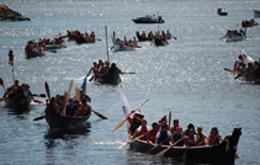 The Annual Canoe Journey is a traditional gathering of Coast Salish people who travel through the waterways of the Salish Sea. In 1989, Pacific Northwest tribes revived a tradition of bringing together their people to celebrate their connection to salmon, water and each other. Since then the Annual Canoe Journey expanded from a handful of canoes to include over a hundred tribes and First Nations.

In 2008, a partnership developed between the Salish Canoe Journey and the U.S. Geological Survey to examine coastal waters of the Salish Sea by blending Western science and Coast Salish culture to study water quality and its effects on the ecosystem. Journey participants agreed to equip their canoes with water quality monitoring instruments to measure sea surface temperature, salinity, pH, dissolved oxygen, and turbidity simultaneously every ten seconds across 1,300 kilometers (over 800 miles) of the Salish Sea.

Oxygen levels are generally highest in surface waters and areas where enough light can penetrate to allow photosynthesis to occur – which generates oxygen.

Oxygen levels are lowest in areas where:

Warmer water also encourages growth of phytoplankton which use up oxygen in deep water as they sink and get consumed by bacteria.

Five things you can do