Between 2007 and 2017, over 6,700 acres of previously closed shellfish beds in Puget Sound have been upgraded or re-opened due to improvements in water quality.

However, there has also been an overall increase in the number of acres of shellfish beds that are prohibited or restricted from harvesting. This increasing trend is due partly to increased water quality monitoring, changes in classifying closed areas, and methods of mapping beach closures. 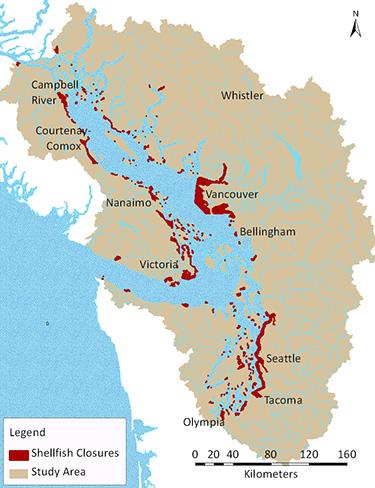 Map of shellfish closure areas in the Salish Sea (as of 2014).

Early Salish villages relied on large quantities of clams, oysters and crabs. The history and evidence of such abundant use has been established through the great shell mounds - called middens - still found today near ancient village sites. One midden near Everett in the Snohomish River delta was found to be almost six feet in height and nearly a quarter mile long.

Today, Coast Salish tribes still rely on shellfish in addition to salmon as a source of high protein, low fat, nutrient rich foods that comprise a large portion of the traditional diet. Since clams are sedentary, they provide a stable food source - more reliable than hunting or fishing. A saying shared by many Coast Salish tribes is that, "when the tide is out, the table is set."

Shellfish are an important part of the economy, lifestyle and heritage of this region. The Salish Sea is home to an abundance of clams, mussels, and oysters and other bivalve shellfish. Because they feed by filtering the water that washes over the shellfish bed, they can accumulate disease-causing bacteria and viruses that are harmful to people.

The shellfish harvesting indicator reflects access to safe shellfish resources in the Salish Sea ecosystem. Shellfish beaches are assigned a classification that determines whether shellfish in that area are safe to eat. The classification is based on the results of a local sanitary survey and water quality monitoring.

If monitoring shows poor water quality, or if the sanitary survey identifies potential impacts to water quality - such as being located too close to a wastewater treatment outfall - then the shellfish beach may be closed to harvesting.

This region is one of the largest producers of shellfish in North America. Areas that are closed to shellfish harvesting can impact the livelihood of growers, workers, supermarkets, restaurants, hotels, and sales of recreational equipment, among other economic losses. Shellfish closures also impact First Nation and tribal shellfish harvesting rights, which have been part of their traditions and economies for thousands of years.

The primary sources of pollution that lead to closure of shellfish harvesting areas are polluted runoff from urban areas and farms, and uncontrolled sources of sewage and septic wastes.

Urbanization creates more roads and other impervious surfaces that can become "super highways" for oil, grease, chemicals, fertilizers, pet waste, sediment and other pollution when it rains. Likewise, manure and agricultural chemicals that are not properly treated or controlled by farms can end up in our waterways and impact shellfish growing areas.

Sewage from malfunctioning or aging treatment plants and failure of home septic systems can release human waste and other dangerous bacteria and pathogens into shellfish-growing areas. Some marinas and boaters also release untreated sewage to water.

Government agencies are working with communities to create shellfish protection districts and develop strategies for both preventing and responding to harvest closures. Tribes in Washington and First Nations in British Columbia are leading community partnerships that target specific pollution sources. In both the U.S. and Canada, many shellfish growers belong to trade associations which foster environmental responsibility and effective stewardship of shellfish growing areas.