10 of the 17 rivers we studied showed decreasing summer flow trends since 1975. Five of the remaining seven rivers showed only minor increases or decreases in flow.

The Salish Sea is an ecosystem defined by the movement of water. Freshwater begins as rain or snow in the Cascade and Olympic mountains. It flows in streams down through fertile valleys and into a complex network of salt marshes, wetlands, and bays.

Low flow in our streams and rivers occurs during summer months when there is less rain and warmer temperatures, and the snow-pack has been depleted. 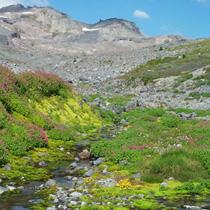 Low flow in our streams and rivers occurs during summer months when there is less rain and warmer temperatures and the snow-pack has been depleted through spring melt.

Since 1975, 10 of the 17 rivers we studied showed strongly significant decreasing summer flow trends. Five of the remaining seven rivers showed weaker increasing or decreasing in flow over the 35 year study period (see chart below). 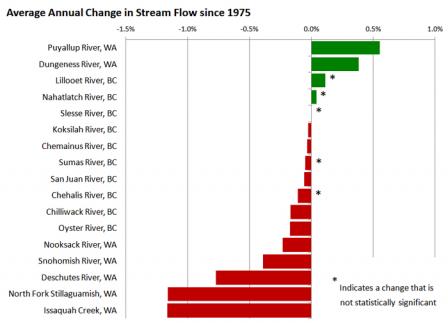 The remaining two rivers that showed strongly increasing flow trends (Puyallup and Dungeness) have upper tributaries that are fed by glaciers or snow fields high in the mountains. The increased flow in these rivers may be due to glacial melting and recession.

Also, the most recent low flow seasons have been associated with "La Niña" weather conditions resulting in two of the highest flows on record, which may have tipped some of the trends toward increasing.

If summer flows continue to decline as demand for water continues to increase for uses such as drinking water and irrigation, there is potential for conflict between human and ecosystem needs. Low water flow is already a priority issue for salmon in 14 of the 19 Puget Sound Water Resource Inventory Areas.

Changes in stream flow are associated with shifts in salmon habitat, water temperature, nutrient availability, and sediment levels. These changes can impact both human uses and the life cycles of salmon and other aquatic life.

Population in the Dungeness and Elwha River basins is expected to grow by an additional 30% by 2026, suggesting a potentially unsustainable trend for water use. However, a water resource management rule was recently adopted to prevent further declines in flow resulting from ground water withdrawals.

Rainfall and snowmelt are the primary sources of water for rivers and streams in the Salish Sea, but many other factors can also impact stream flows, including:

Climate can also affect trends. However, declining flow trends in the Salish Sea are more likely associated with human-caused watershed impacts since recent climate patterns (including trends in the Pacific Decadal Oscillation and two strong La Niña years) would be expected to increase stream flows rather than decrease flows.

Streams and rivers are being closely monitored to help forecast low flow conditions. Actions that are already underway in both Canada and the U.S. that will help address this complex issue include water conservation programs, promoting sustainable development, and long range planning.