"It is through teachings, transferred from those that hold knowledge (elders) to those that learn and carry on the knowledge (youth), that the health and well being of the community are preserved and upheld through the generations."

Access to clean swimming beaches contributes to the high quality of life we enjoy in this region. It's also an indicator of water quality.

Bacteria found in human and animal feces (poop) can cause serious health problems if the levels are above water quality standards, leading to reduced access to swimming beaches.

This indicator tracks the percentage of swimming beaches in the Salish Sea that consistently meet water quality standards through the swimming season.

Between 2004 and 2010, over 85% of swimming beaches in Georgia Basin, and over 80% of beaches in Puget Sound consistently met water quality guidelines and standards (see chart below). 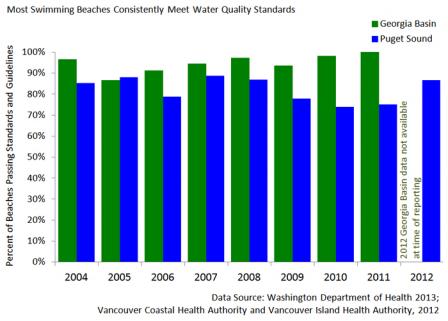 In 2011, all beaches in the Georgia Basin met Canadian water quality guidelines for recreation (see Table 1 below - data for 2012 were not yet available at time of reporting).

In Puget Sound, eight swimming beaches (out of the 60 beaches monitored) exceeded water quality standards more than once through the 2012 swimming season (see Table 2 below).

Clean swimming beaches are an important part of the quality of life in this region.

Swimming, diving, or wading in water contaminated with fecal bacteria can result in gastrointestinal illness (such as diarrhea or vomiting), respiratory illness, and other health problems. Skin, ear, eye, sinus, and wound infections can also be caused by contact with contaminated water.

Fecal contamination at swimming beaches can be caused by a number of issues, including:

Agencies on both sides of the border routinely monitor recreational beaches during the swimming season and post beach advisories if water is unhealthy for swimming. We're also taking actions to help reduce the causes of beach closures due to high levels of bacteria.