Toxics in the Food Web: Pacific Herring and Harbor Seals

Pacific herring (Clupea pallasii) and harbor seals (Phoca vitulina) are two species that can help us determine the levels, trends and effects of certain types of pollution that are considered persistent, bioaccumulative, and toxic. These include polychlorinated biphenyls (PCBs) and polybrominated diphenyl ethers (PBDEs), which are commonly used to make fire resistant products.

PCBs and PBDEs are found in all harbor seals of the Salish Sea, but levels are declining.

Likewise, levels of PCBs and PDBEs in Pacific herring are generally declining or remaining stable. However, PCBs in herring in southern Puget Sound are above levels that may cause negative effects in the food web. 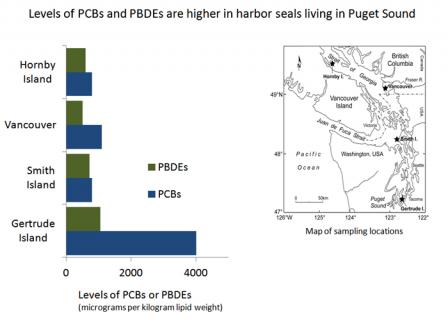 PCBs and PBDEs disrupt the endocrine system (which produces hormones that regulate metabolism, growth, and tissue function, among other things). They have been associated with adverse health effects in laboratory animals, wildlife and humans.

Evidence of these contaminants in Pacific herring and harbor seals suggests the potential for impacts to other species of the Salish Sea.

The higher levels of PCB and PBDE found in harbor seals in southern Puget Sound is likely due to the more heavily urbanized and industrialized environment in those areas. However, improving PCB trends in harbor seals suggest that environmental regulations have been helping.

More monitoring is needed to explain trends in PBDE levels as new regulations are being phased in.

Regulations banning PCBs were enacted in the U.S. in 1976 and in Canada in 1977. In 2004, products containing some forms of PDBE (penta- and octa-) were voluntarily removed from the North American market.