Region 8 has successfully facilitated the redevelopment of Superfund sites across the Rocky Mountains and Plains region. These successes are largely due to the diligence and innovative thinking of EPA site staff, their state counterparts, and the cooperation of other external parties, such as site owners, local governments, community groups, and developers. To recognize these cooperative outcomes, the Region 8 Superfund Remedial Response program in the Region 8 Office of Ecosystems Protection and Remediation created an external Environmental Achievement Award for Excellence in Site Reuse. This Excellence in Site Reuse award recognizes significant achievement in protection of public health or the environment, or in advancing the Agency's strategic goals.

The Environmental Achievement Award is a recognized award under EPA Order R8.3130.5, EPA External Awards Program. Region 8 designed this Environmental Achievement Award for Excellence in Site Reuse or the Excellence in Site Reuse award to recognize those who have supported Superfund reuse. Those receiving this external award have made outstanding efforts when redeveloping a Superfund site.

The Excellence in Site Reuse Award also promotes EPA's efforts to increase public awareness of and participation in its decision-making processes. Public acknowledgement of the important roles and significant contributions that individuals, companies, organizations and/or communities can make to EPA's cleanup and redevelopment programs will foster and facilitate future response and reuse successes. In addition, this award supports EPA's mission of protecting human health and the environment, highlights the advantages of reuse of contaminated property, and provides public education regarding the important role of community involvement in protection of human health and the environment.

The Excellence in Site Reuse award may be given by the Regional Administrator to individuals and groups external to the Region such as a developer, site owner or local government who has demonstrated excellence in working cooperatively with Region 8 to ensure the reuse of a Superfund site was complementary with the remedial actions taken and may have even enhanced the remedial actions.

In August 2019, Region 8 celebrated the Montana Environmental Trust Group East Helena Team (METG) with a Region 8 Excellence in Site Reuse Award for their efforts in remediating and promoting redevelopment of the East Helena Superfund site and of lands formerly owned by the American Smelting and Refining Company (ASARCO) in East Helena, Montana. For more than a century, ASARCO operated a lead smelter along the banks of Prickly Pear Creek. After ASARCO declared bankruptcy in 2005, the METG was entrusted as the Trustee of the Montana Environmental Custodial Trust to oversee and implement site cleanup. The METG has fully participated in the RCRA and Superfund process from the investigation, remedy selection, remedial design and corrective action construction, as well as institutional control implementation. A 2011 EPA-hosted redevelopment planning design charrette gathered a broad group of community stakeholders to explore how the 2,000 acres of property owned by the METG might be returned to beneficial use. The East Helena, East Helena, MT - Reuse Plan (PDF)(12 pp, 6.6 MB, About PDF) summarizes the outcomes from the community planning charrette. Building from that base, the MTEG worked to align cleanup implementation with desired community uses, actively engaging with EPA, Montana Department of Environmental Quality, local government representatives and community stakeholders to support reuse opportunities. Today, Prickly Pear Creek has been restored and plans for a network of trails that provide public access to the waterway and connect the area with other parts of the Helena valley will soon be a reality. The East Helena Public School District opened a new elementary school on a 50-acre parcel of remediated lands in 2018 and has begun construction of a new public high school. A Montana-based developer has purchased 100 acres of METG property and is working with the city of East Helena on development of a residential subdivision that will consist of 300 single family homes.  Another Montana-based company acquired approximately 230 acres from METG for a mixed-use development. METG has shown superior achievement in community-based environmental protection and involvement as well as effective, cooperative partnering with EPA, the state, local government, East Helena Public Schools, and businesses and community organizations, to instill environmental awareness and achieve environmental and reuse goals. 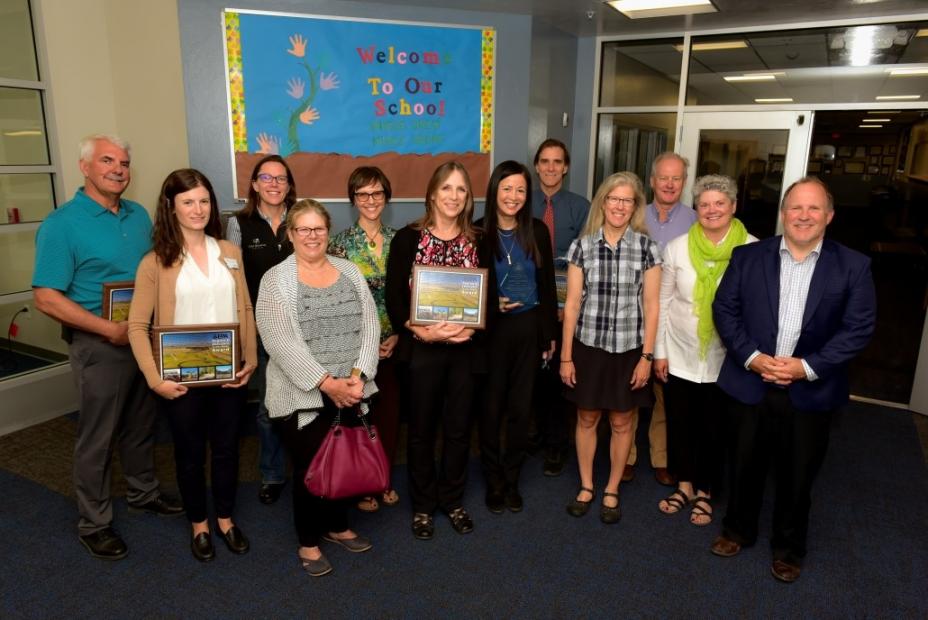 Certificates were awarded to dedicated supporters of the East Helena Superfund site’s reuse, including:

In November 2018, Region 8 recognized the work and collaboration in Libby, Montana, since the W.R. Grace vermiculite mine became a Superfund site in 1999.  EPA began working with the city of Libby in 2009 to see how cleanup work at W.R. Grace’s former export plant could support beneficial reuse in this area. The city of Libby came together with EPA, Montana Department of Environmental Quality (MDEQ), Lincoln County plus many other federal and state partners and community organizations, to develop a coordinated approach to the area’s cleanup and redevelopment. In 2013, the city of Libby officially opened Riverfront Park. The park has become a crown jewel for Libby and is used for community gatherings, weddings and celebrations, including Libby’s annual Riverfront Blues festival.

Certificates were awarded to dedicated supporters of the Libby Asbestos Superfund site’s reuse, including:

In April 2015, Region 8 presented the second "Excellence in Site Reuse" awards to City of Midvale, Utah, for their efforts to reuse and redevelop the Midvale Slag Superfund site in Midvale, Utah. The City of Midvale has been instrumental throughout the Superfund process from initial investigations to cleanup to reuse and continued site maintenance. Collaborative and City-led efforts have produced Bingham Junction, an on-site thriving mixed-use development. The site now supports light rail system infrastructure, residences and assisted living facilities, office buildings for national and international companies, a supermarket, retail stores, and recreational amenities. A staff position in the City of Midvale’s offices provided oversight and assisted developers with the implementation of appropriate institutional controls. This innovative approach ensures the site is used responsibly and safely. EPA, Utah Department of Environmental Quality, Salt Lake County, the Cities of Midvale and Murray, potentially responsible parties and community members worked together to clean up and successfully reuse the site.

Certificates were awarded to dedicated supporters of the Midvale Slag Superfund site’s reuse, including:

Awards will continue to be granted to sites meeting the above eligibility and evaluation criteria. 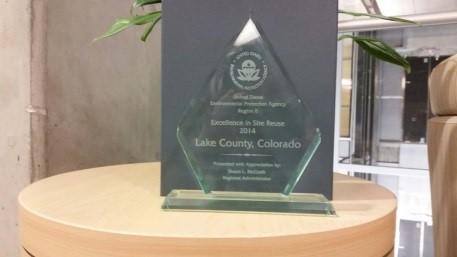 Shaun L. McGrath, Region 8 Regional Administrator presented the Lake County Commissioners with the Region’s first "Excellence in Site Reuse" award on December 18, 2014 for their extraordinary efforts to reuse the California Gulch Superfund site.In December 2014, Region 8 presented the first "Excellence in Site Reuse" awards to Lake County, Colorado, for their efforts to reuse and redevelop the California Gulch Superfund site in Leadville, Colorado. Three key reuse projects at the site, the Mineral Belt Trail, the Lake County Community Park and Soccer Fields, and the Restoration of the Upper Arkansas River, which recently received the Colorado Parks and Wildlife’s Gold Medal Designation for trout fishing, are attracting visitors from across the country. These projects and other site developments were made possible by collaboration among the EPA, the Colorado Department of Public Health and Environment (CDPHE), other federal agencies, local government, and potentially responsible parties. These stakeholders worked together to ensure that the site’s cleanup would both protect human health and the environment as well as support the community's goals of expanding tourism, recreational amenities and economic diversification.

Certificates were awarded to dedicated supporters of the California Gulch Superfund site’s reuse, including: