The Basics - Using BMDS and the BMDS Wizard

The ten Berge model has been superseded by EPA’s categorical regression software CatReg.

BMDS 2.7 is no longer under active development. With a few exceptions, most models are now maintained in BMDS 3.x.

The ten Berge Concentration × Time (C × T) Model is a unique model within BMDS, as it allows for more than one explanatory variable in a dichotomous dataset to influence response

responseThe biological result of an exposure or dose. Biological responses can be quantified in several ways. Some examples of the type of response data that can be used in a BMD dose-response analysis are dichotomous data (quantal data), nested data, continuous data, and categorical data. (for example, dose and time). C × T  modeling is primarily used in the context of acute inhalation exposures, and is based on Haber’s Law (C × T = k).

Haber’s Law assumes a consistency across chemicals (i.e., a linear relationship between exposure concentration and duration) that may not be true for predicting response for all chemicals.  The ten Berge model does not assume a linear relationship as it includes an exponent term on the C parameter (i.e., the conceptual model form is Cn × T = k).  When n >1, the response is considered concentration-dependent (i.e., response is more influenced by increases/decreases in exposure concentration); when n <1, the response is time-dependent.

Download tenberge_exercise.zip (ZIP)(1 pg, 498 B) and extract the tenberge_qs.dax file to the BMDS Data subdirectory on your computer. You will use this dataset for the following exercise.

As with other BMDS-only models, a correctly formatted dataset is critical to success. You can create datasets for the ten Berge model in Excel and then copy/paste the data into a BMDS Data Grid. Here’s what the dataset needs at a minimum:
Briefly, the ten Berge model can calculate three separate results:

The remainder of this exercise will describe the .out files and the Excel plots.

The .out file reproduces the data input and options you entered. The .out file describes three separate results (reproduced below):

Estimation of ratio between regression coefficients

BMDS creates the plots using the following Excel file (assuming a standard BMDS installation): \<BMDS Program Directory>\SysData\tenBergePlotTemplate.xls. You may want to save this file to a different name or path if you want to work with the results later.

The constant probability plot shows the contour of concentration and time combinations for a user-specified probability. It corresponds to the Estimation of Exposure_ppm result.

The .out file's Estimated Exposure_ppm for a 60% response of interest at 30 minutes is 1.650e+003 (e.g., 1650 ppm). We want the constant probability contour graph to show what combination of time (x-axis) and concentration (y-axis) results in a 60% response.

To do that, you may need to edit the following cell in the spreadsheet to generate the plot:

Leave cells E25, E26, and E27 unchanged. We did not specify 3rd, 4th, or 5th explanatory variables on the BMDS Options screen.

On the contour plot, hover the pointer at or as close to 30 minutes as you can along the x-axis. Excel should display the values “30, 1.65E+003” at that point. (You may need to zoom in on the graph to find the exact point.) 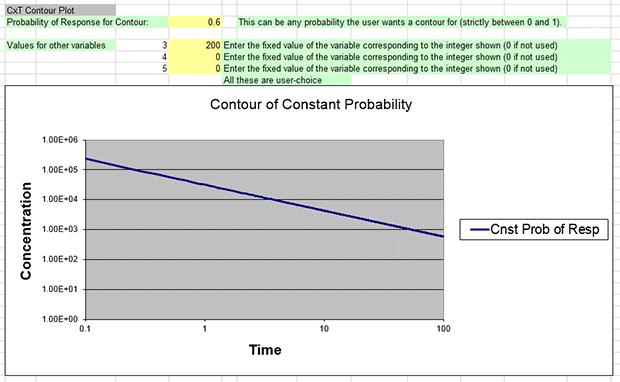 The probability of response plot is a function of either concentration or time. It corresponds to the .out file's Estimation of response result.

Editing the plot's numbers as above will result in a dose-response curve plotting response (y-axis) against dose (x-axis) for an exposure lasting 60 minutes.

You should get a graph that looks like the following screenshot. Hover the mouse pointer along the curve until it intersects at 2000 along the x-axis; Excel should display the values at that point as “2000, 0.754848794.” 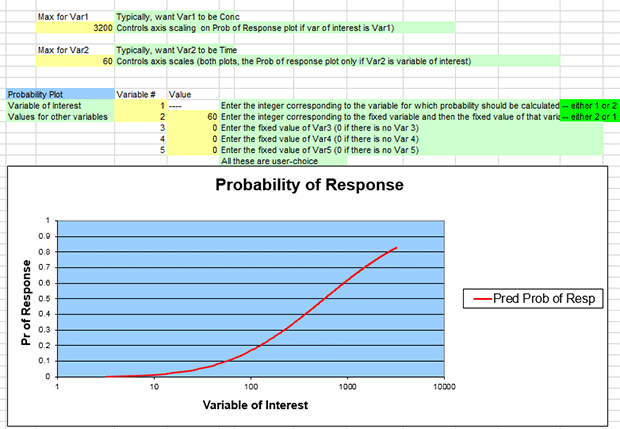 You can also generate a plot where the independent variable (x-axis) is time. To do this, edit the spreadsheet cells for the plot as follows:

Editing the plot's numbers as above will result in a dose-response curve plotting response (y-axis) against time (x-axis) for an exposure of 2000 ppm.

You should get a graph that looks like the following screenshot (you will need to manually edit the plot's horizontal axis using Excel's Format Axis command to show the minimum bound as 1.0 and the maximum bound as 100.0). Hover the mouse pointer along the curve until it intersects at 60 along the x-axis; Excel should display the values at that point as “60, 0.754848794.” 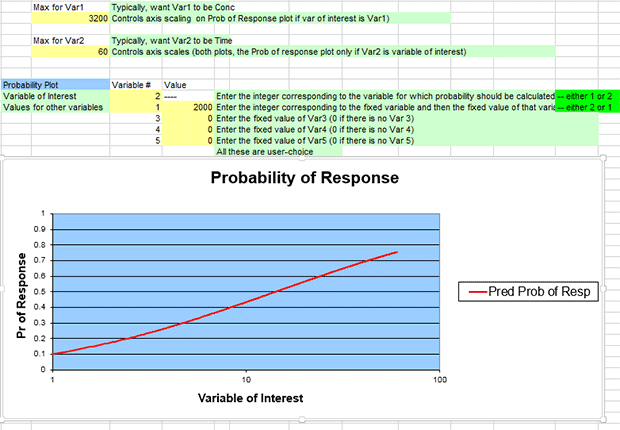 Estimation of Ratio Between Regression Coefficients

In this example, the ten Berge model was run with exposure concentration (variable 1) and time (variable 2) logarithmically transformed.

Therefore, the ratio between the regression coefficients (b1 and b2) for these two parameters gives the value of n in the equation Cn × T = k.  In this example, as we see from the .out file results, n = 1.154502. We also see that the 95% confidence interval on this value is (0.699105, 1.609898).  In this example, because the confidence level is nonsignificant, the response is potentially concentration dependent. Or, put another way: increases/decreases in exposure concentration influence the responses to a potentially greater degree than do changes in the duration of exposure. However, if the duration of exposure was more significant than the exposure concentration, then we would expect to see values of n less than 1.

Next: Nested Dichotomous Data (Use with BMDS)