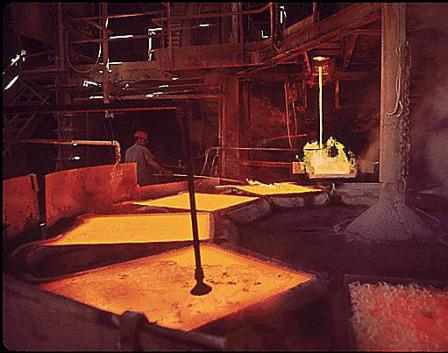 EPA promulgated the Nonferrous Metals Manufacturing (NFMM) Effluent Guidelines and Standards (40 CFR Part 421) initially in 1974-1976, and added subcategories and revised the regulations in 1980-1990 pursuant to Clean Water Act amendments and litigation. The regulations cover wastewater discharges from a wide range of metal manufacturing facilities. The NFMM Effluent Guidelines and Standards are incorporated into NPDES permits for direct dischargers

direct dischargerA point source that discharges pollutants to waters of the United States, such as streams, lakes, or oceans., and permits or other control mechanisms for indirect dischargers

What is Nonferrous Metals Manufacturing?

These activities are included within the following NAICS codes:

Metals coverage under Effluent Guidelines
- Click to enlargeNote: The NAICS group listing is provided as a guide and does not define the coverage of the NFMM regulations. For precise definitions of coverage, see the applicability sections in 40 CFR Part 421.

The NFMM effluent guidelines apply to facilities in 31 subcategories: