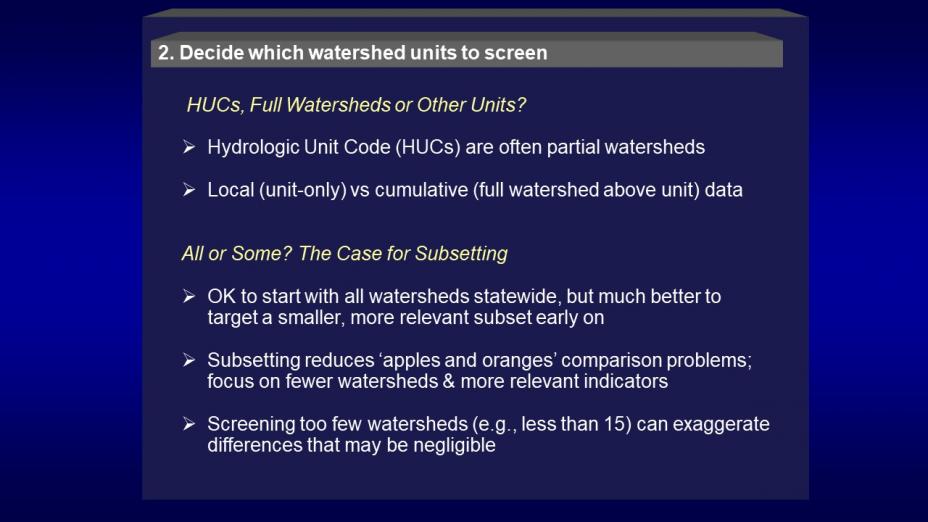 Well-organized data are the foundation of any assessment. Key organizing elements take shape in the screening design step. These include:

Select the targeted units that will be assessed and compared

RPS was designed to target watershed-related units, but there are many types and scales from which to choose. State-specific RPS Tools are ready to go with data at the HUC12 scale, but alternative units can be added by custom design if the circumstances warrant. Considerations for using other units include unit boundary dataset availability, indicator data availability, partial- vs whole-watershed information and relevance of the unit to the screening purpose.

Use of existing watershed units saves substantial time and money as well as enabling access to existing indicator data already compiled at the most frequently used scales. Pre-delineated watershed units at several scales are available nationally in the Watershed Boundary Dataset (WBD) Exit These are organized by Hydrologic Unit Codes (HUCs) at several numbered levels. The most commonly used and data-rich HUC level for RPS is HUC12, whose units average roughly 36 square miles in area. About half of HUC12s in the conterminous US are true (full) watersheds whereas the other half are partial watersheds based on surface drainage but receiving additional drainage from other HUC12s upstream. Please note that, throughout RPS descriptive materials, the term ‘watershed’ is often used for brevity whether or not the units are full or partial watersheds.

The Watershed Index Online (WSIO) and the EnviroAtlas include nationwide compilations of hundreds of watershed indicators at the commonly-used HUC12 scale. Standard datasets of about 300 local (HUC only) HUC12 indicators from these sources are embedded in all the conterminous US state-specific RPS Tools. The larger HUC8 level, whose units average 1400 square miles, is also sometimes used in RPS for broad, first cut screenings across large areas. Some custom state tools include the HUC8 scale along with HUC12. At the small end of nationally available watershed-related units are the NHDPlus catchments Exit which average about a square mile in area. Some smaller states have catchment scale data in their custom RPS Tools. Conterminous US catchment-scale indicator data, including both local (catchment only) and cumulative (full watershed draining to the catchment) values, are available in the downloadable StreamCat dataset. Local-only data can be aggregated into cumulative watershed data by using HUC12 and catchment tools developed for this purpose.

It is also possible to compare waters as the selected unit instead of watersheds if appropriate data are available on a water body basis. In this case, it still remains useful to have watershed data along with data from the water bodies themselves because of the pervasive influence of watersheds on water body condition. Screening on a water body level is often more difficult than screening watersheds because of the custom watershed delineations and individual water body data requirements involved. When custom-mapped watersheds are not mutually exclusive (e.g., watersheds based on two different points along the same river), mapped representation of indicator values and screening results may be impossible.

RPS projects do not necessarily screen and compare all the watershed units that an RPS Tool may contain. Focusing on a subset – a user-defined set of watershed units that share some key traits of interest -- provides a chance to compare within a smaller and more similar group of higher relevance to the purpose for the screening. For example, an RPS project may only be interested in comparing HUC12s that contain impaired waters, or only watersheds with greater than 5% urban land, coldwater fisheries or other characteristic of interest. Subsets can be geographically continuous (e.g., all HUC12s within a HUC8) or dispersed (e.g., HUC12s statewide that contain pathogen-impaired streams). Some screenings even use a two-stage design, screening larger watersheds statewide and then screening and comparing the sub-watersheds within each watershed for more localized purposes. This approach to refining subsets of interest is further described in the Scenario Development (PDF) (12 pp, 150 K) document.

The RPS Tool helps users identify subsets of high interest and organize lists of them for repeated future use. The Tool’s SUBSETS tab provides a convenient place to paste in columns of watershed ID numbers for each subset of interest, later to be copied and pasted in during setup for a screening run. Due to interest in screening projects within each HUC8, some states have used the SUBSETS tab to compile the HUC12 ID numbers for all their HUC8s in the state. Also on the SUBSETS tab is a “Define Subsets” function that supports using Boolean combinations of any indicator characteristics (e.g., value thresholds or ranges, presence/absence, locational factors) in the Tool’s entire dataset to define special subsets, the IDs of which are then saved onto the SUBSETS tab. See RPS Training and User Support for training materials on subsetting with the RPS Tool.