The Stressor Identification process begins by defining the subject for analysis (i.e., the case, Figure 1-1). This is accomplished by determining the investigation’s geographic scope and the effects to be analyzed. The case definition is foundational for causal analysis: it influences what information is assembled, which causes are considered and how conclusions are presented. For this reason, it is important to get input from managers and stakeholders at this early stage. 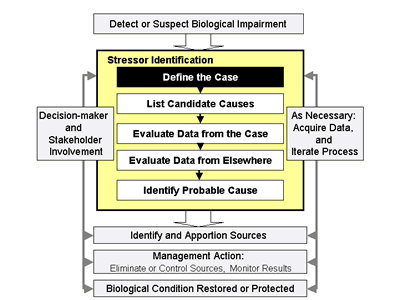 Figure 1-1. Illustration of where Step 1: Define the Case fits into the Stressor Identification process.Causal analysis is triggered by the observation of a biological effect, including:

In many cases, the observed biological effects are linked to a biological impairment as defined by a regulatory authority. For example, a stream reach may not meet designated use standards (e.g., fishing) or the specific aquatic life-use class designation assigned by the state.

Describing the impairment in terms of what is actually happening biologically makes it easier for you to consider the mechanisms behind the impairment. This also allows you to draw on supporting evidence from other areas (e.g., similar situations in other locales, scientific literature, etc.).

The second part of defining the case is determining its geographic scope. The geographic scope of the case has two parts.  First is the impaired stream reach itself (or similar unit). Second is sites within the system (the same stream, watershed, bay, or reservoir) that are unimpaired or impaired differently and can be used for comparison.

Whenever possible, all locations within a case should be part of the same system. They also should be located relatively close together, and aside from anthropogenic effects, should be as similar as possible physically, chemically and biologically. Developing a map of the areas making up the case may make it easier for you to clearly outline the case's geographic scope.

The third part of defining the case is describing the assessment's objectives. Objectives are influenced by the management context of the investigation, and often focus on identifying which of many candidate causes are limiting biological condition.

Once the case has been defined, you move on to Step 2: List Candidate Causes.

Each causal assessment focuses on a specific impairment or group of similar impairments collectively referred to as the case.

The case has two components. First, it includes the impaired location. For streams, this is often defined as a reach; for lakes or estuaries, it could be a defined part of the system. Second, the case includes other sites within the same aquatic system that are either not impaired, or are impaired in a different way. These other sites can be used as positive or negative references (i.e., sites used for comparison). All locations within a case must be spatially associated (in the same stream, watershed, bay, reservoir, etc.). In addition, they should be similar physically, chemically, and biologically, except for anthropogenic effects. That is, if there were no anthropogenic effects, the biota should be similar at all sites in the case—the case should be a single ecological system. The acceptable degree of dissimilarity depends on the scale of the assessment. Assessments of extensive impairments imply more biological, chemical and physical variance due to stream gradients, differences in geological substrates, and other factors.

The first important step in the process is to document and carefully describe the impairment that prompted the evaluation. Whenever possible, you should describe the impairment in terms of its nature, magnitude, and temporal extent. It can be important to describe how the impairment makes the waterbody unfit for its intended use, to clarify the purpose and relative importance of the assessment. For example, if fish at the impaired site are covered with lesions, no one wants to fish for them.

In addition to describing the impairment, it is useful to prepare a background statement describing how the biological impairment was identified. For example, it might be appropriate to refer to a numerical or narrative biocriterion, or to a reference condition that has been created for this type of waterbody, including the documentation for its derivation. If conditions are below expectations, it is important to discuss the quality or condition of the stream in relation to the quality or condition of other streams in the area, or to the same stream in other places or at other times. Including photographs of the waterbody with the descriptive statement can provide visual evidence of a lost resource, and can later be used in describing potential pathways that may have led to the impairment.

Equally important are photographs of what the resource could be like (e.g., taken from other locations), what it used to be like, or what valued attributes are still retained.

Making inferences about causes is easier when the impairment is defined in terms of a specific effect. If multiple effects with different causes are lumped together, it may be mistakenly assumed that there is only one cause. Instead, each response should be quantified as a count (e.g., abundance of darter species) or a continuous variable (e.g., mean length of darters). Identifying specific effects may require disaggregating multimetric indices to identify responses that indicate distinctive mechanisms or exposure pathways, and that have sufficient range of variation to show changes.
When several responses are highly correlated, you may be able to simplify analyses by selecting one response parameter to represent the group. Document the rationale for selecting specific effects and relate them back to the impairment definition that prompted the analysis.

The geographic area under investigation should be clearly stated. If several distinctive impairments appear to be occurring within the area (e.g., a watershed), the geographic area associated with each should be defined. The regulatory context also may influence the geographic scope of the study: for example, for acid rain regulation the geographical area is very large, whereas a National Pollution Discharge Elimination System (NPDES) violation may involve less than a mile of stream reach.

Define the Objectives of the Investigation

The objectives describe the management context within which the results of the investigation will be used. These objectives may be limited or broad. Most commonly the objective is to evaluate which cause, among several potential candidate causes, is most likely responsible for an observed effect. This approach might be appropriate for waters that are not attaining their designated use, and for which Total Maximum Daily Loads (TMDLs) must be developed. The investigation's purpose influences the range of candidate causes that will be considered. For this reason, defining the investigation's objectives has ramifications for the final outcome and the practical use of the entire causal assessment effort. It also determines the extent and types of data that will be analyzed, and influences the geographic area and time frame under consideration.
Several factors influence the overall scope of the investigation, including:

If the study is limited by a paucity of data, it still may be appropriate to attempt a causal determination with the available data, and then indicate what additional information is needed to identify the impairment's cause with greater confidence.

Results and Next Steps

At the conclusion of Step 1, you should have the following products (example products from Step 1):

After you develop these products, proceed to Step 2: List Candidate Causes.