CADDIS provides a pragmatic guide for determining the causes of undesirable biological conditions in aquatic systems. The process presented on the CADDIS website  is derived from the Stressor Identification Guidance Document published by U.S. EPA's Office of Water and Office of Research and Development. The basic approach remains the same, but we have made the process more accessible and expanded the concepts with examples and case studies.

Q: What is stressor identification?

A: The determination by a specific process whether any physical, chemical, or biological entity is the cause of an adverse response 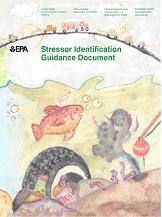 Throughout the site, supplemental information and links are provided that lead to related information in other parts of CADDIS or outside of the website. Navigating CADDIS may be easier if these helpful links are viewed in a separate tab or window (e.g., by right clicking on the link and then selecting "Open Link in New Tab" or "Open Link in New Window").

We recommend that new users first read the Guide Overview, which summarizes the entire process. The Fundamentals of Causal Assessment section then summarizes the principles and methodology underlying CADDIS.

Once you are familiar with the process, the Step-by-Step Guide provides detailed technical guidance. You may find it helpful to review types of evidence, or skip directly to the parts of the site you find most useful. Some of the most visited pages on CADDIS site include: 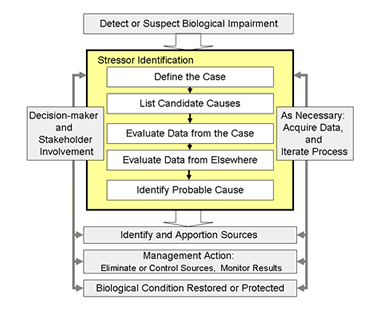 You will see this figure referenced throughout the Step-by-Step Guide volume, with different boxes bolded in black to indicate where you are in the process.

Before the Causal Analysis Begins

What is the impetus for a causal analysis? Usually, something or some observation triggers the need. It may be curiosity, pure and simple. But, more often the impetus is a problem that can't be fixed until the cause is identified. Many U.S. EPA water management programs may benefit or even require the identification of a cause of a biological impairment.

What are the characteristics of an impaired waterbody? This website assumes that you already know that your stream or river is biologically impaired. For more information on making this determination, refer to U.S. EPA guidance on evaluating the biological condition of bodies of water (Biocriteria and Biological Assessment). Types of biological impairments that may warrant a causal analysis include fish kills, algal blooms, loss of biological diversity or unusual composition of biological assemblages.

Causal analysis requires some data and knowledge about ecology. Ecology is an inclusive science that integrates understanding of biological, physical and chemical processes in complex, interactive landscapes. Individual scientists can independently perform causal analyses, but a team often does it better. Effective causal analysis teams include members with expertise in a wide variety of environmental fields, and strong analytical, social, and communication skills. Social skills are particularly necessary when communicating the needs of the team to stakeholders and decision-makers, and when enlisting their support after the cause has been identified and it is time to correct the problem.

Stakeholders and decision makers can be viewed as part of the extended team engaged in the investigation to find the cause of a biological impairment. They can be sources of information. They can suggest possible causes of impairment and often know about historical impacts that may no longer be present or which have become hidden by a changing landscape.

Involve your stakeholders and decision-makers often. When the cause has been identified and it's time to take action, you will need community support to make environmental improvement a reality.

Causal analysis requires data, which may come from any reliable source. Data are used to show causal relationships between candidate causes and specific effects. New data may become available at any step of the process or you may decide to obtain more information to fill identified data gaps. These are normal iterations of the Stressor Identification process and can occur at any time. In fact, a screening level causal analysis is very useful for identifying the types of measurements and locations for sampling that will clinch a case.

Defining the case involves gathering information that sets the stage for the causal analysis. Products of this step include: 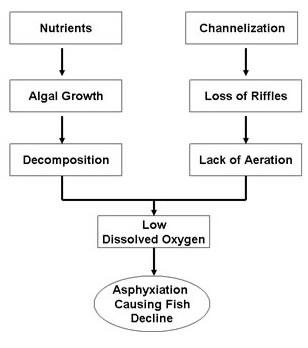 Step 3: Evaluate Data from the Case

The most powerful evidence is based on cause-effect relationships developed from data obtained from the case itself. This evidence is developed in Step 3. Step 3 has two goals. The first is to use data from the case to develop evidence that allows you to confidently eliminate very improbable causes or use symptoms to refute or diagnose a cause.

Criteria for Eliminating a Candidate Cause 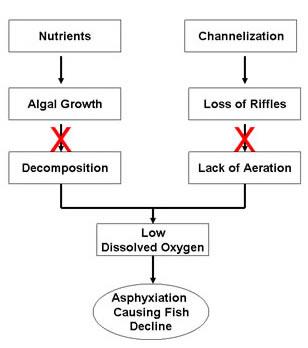 Figure 3. Low dissolved oxygen can be eliminated as a possible cause in this simple example because no excess algal growth or loss of riffles that aerate water were observed.If data from the cases shows that any characteristic of a causal relationship is very improbable, you have a very strong case for eliminating a cause. For example, in Figure 3, the red "x"’s on the arrows are drawn because riffles were observed at the site, algal growth was minimal, and continuously monitored oxygen levels were always near saturation. Therefore the case for low dissolved oxygen can be confidently refuted.

It sounds deceptively easy, but is actually rather difficult to do. It becomes more difficult because many uncertainties usually arise. For instance, measurements of the impairment and the agent may have been made on different days. The more detailed guidance suggests what to do in some of these situations, but the point here is that uncertainty is very common. What is reasonable?

Most candidate causes cannot be diagnosed or eliminated. Further evaluation is required that uses knowledge gained from laboratory studies and from past experiences and observations in other waterbodies. For example, one of the most useful types of evidence from elsewhere uses the stressor-response relationships developed from laboratory studies. Familiar examples are single chemical, single species toxicity tests. The primary goal in Step 4 is to develop evidence that uses data from elsewhere. Logical and statistical approaches that are used to develop evidence are described in more detail in Fundamentals of Causal Analysis and in Step 4 of the website.

In Step 5, all of the evidence is considered to reach final conclusions about the probable cause. The products of Step 5 include:
Scores for all types of evidence are displayed in a comprehensive table. The score for the evidence from the case and from elsewhere is influenced by the quantity and quality of the evidence. The magnitude of the score is based on the likelihood of observing the effect due to the true cause rather than from a chance outcome. Therefore, the highest scores are given to the types of evidence that:

All of the evidence is evaluated for consistency by looking at the overall pattern of scores. Confidence in the argument for or against a candidate cause is increased when it is supported by many types of evidence. If there are inconsistencies, now is the time to determine whether they are important or can be explained.

Now, the hard part! The overall body of evidence for each cause is weighed, the most compelling lines of evidence are reviewed, and a determination is made. The criteria for determining probable and unlikely causes are described in Step 5 of this guide. But be forewarned, there is no mathematical formula for making the overall determination. Statistical hypothesis testing is inappropriate. Instead, the determination is based on the scientific evidence that you have. Does the evidence show that the candidate cause and the effect exhibit more than one characteristic of causal relationships? Are the characteristics of causal relationships evident and supported by several types of evidence? Is the evidence compelling, consistent and credible?

We recommend that you document your causal analysis in a report. The report typically describes all steps in the Stressor Identification (SI) process including:

The more costly or controversial the remediation and the more skeptical the decision-maker, the more complete the documentation must be. The bottom line is a statement of your reasons for identifying the probable cause and for determining that other candidate causes are unlikely.  Use what works for you:

After the Causal Analysis is Done

Once the probable cause has been identified, the task of managing the factors responsible for the impairment problem still remains. If the process has been set up properly, there should be stakeholders and managers ready to receive the information. The probable cause may have more than one source or may require source identification. There are several U.S. EPA websites that contain information on best management practices (BMPs) for reducing causal agents in a variety of situations, including:

Research underway at the U.S. EPA and in other federal, private and academic research programs will continue to provide insights for selecting and implementing effective management options. So, don't stop with just our suggestions.

If a management action occurs at your site, monitoring the reduction in the causal agent and changes in the biological impairment can demonstrate progress and confirm or refine the findings of the causal analysis. That is, changes stemming from the management action can allow you to determine whether the "real" cause was targeted for action or not. If biological improvement is marginal even with significant reductions in the causal agent, there may be other unidentified causes. If the stream improves dramatically, call a press conference and have a celebration with your stakeholders. Let us know, too—we like to celebrate as well!

This page briefly discusses the fundamental principles of causal analysis upon which the Stressor Identification Guidance Document and CADDIS are based. Causation is essential to science and everyday life, but it has been a topic of controversy in the philosophy of science, and causal analysis can pose practical difficulties.

We based our approach on three particularly useful concepts for analyzing causes: