Alteration of natural hydrologic regimes is a consistent and pervasive effect of urbanization on stream ecosystems. Discharge patterns—the amount and timing of water flow through streams—change with urban development. Key aspects of urbanization affecting hydrology may include:

Commonly reported effects of urbanization on stream flow regimes include (but are not limited to): 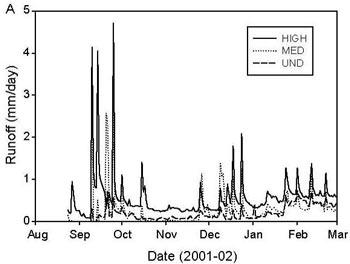 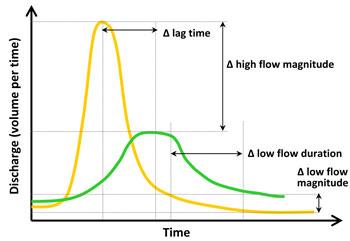 Figure 34. Hypothetical hydrographs for an urban stream (yellow) and a rural stream (green) after a storm, illustrating some common changes in stormflow and baseflow that occur with urban development. Other changes are listed at left.

These hydrologic changes can reduce habitat quality in urban streams and adversely affect stream biota. For example, high flows can scour organisms and substrate from streambeds, while low flows can reduce habitat area and volume. See the Flow Alteration and Physical Habitat modules for further details on biotic responses to these changes. 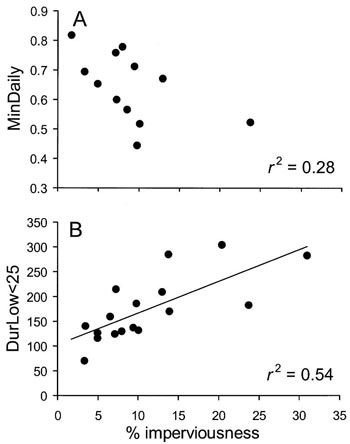 Figure 35. Linear regression models for baseflow variables showing highest correlations with subcatchment imperviousness: (A) minimum daily stage/mean daily stage during late spring; (B) maximum duration of low stage < 25th percentile during autumn. Of the nine baseflow variables tested across five seasons, only these two variables showed relationships with r2 > 0.25, and only in (B) was this relationship significant.
From Roy AH et al. 2005. Investigating hydrologic alteration as a mechanism of fish assemblage shifts in urbanizing streams. Journal of the North American Benthological Society 24(3):656-678. Reprinted with permission.

Decreases in baseflow may result from:

These decreases may be offset, however, by increases in baseflow resulting from: 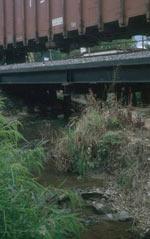 Urban-related increases in baseflow can be especially evident in effluent-dominated systems, or streams and rivers in which wastewater effluents comprise a significant portion of baseflow volumes. For example:

As a result, changes in baseflow in these streams likely affect water and and sediment quality.

Water withdrawals and transfers associated with meeting urban water demand can have significant repercussions for stream systems. Their effects depend upon many factors, including: 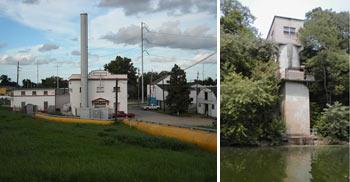 A New Orleans pump station that withdraws water from the Mississippi River and transfers it to a nearby treatment facility (left), and an intake structure for a water supply plant on the Duck River, TN (right).
Photo courtesy of Charlie Brenner (left) and USGS (right) 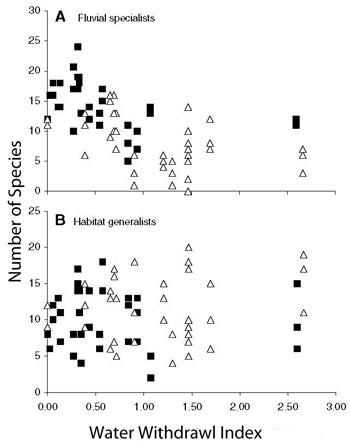 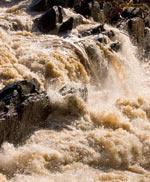 Photo courtesy of U.S. EPA Hydrologic changes associated with urbanization can directly and indirectly affect stream biota in many ways. Effects may include:

For both TQmean and T0.5 yr, low values indicate the prevalence high discharge peaks that both rise and dissipate sharply—that is, increased flashiness and flow variability.