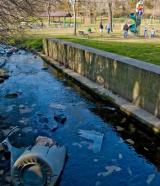 Removal of riparian vegetation and channel hardening in an urban stream.

Urbanization typically reduces the extent and quality of riparian areas, via the removal of native vegetation and the development of near-stream areas (see Figure 4). 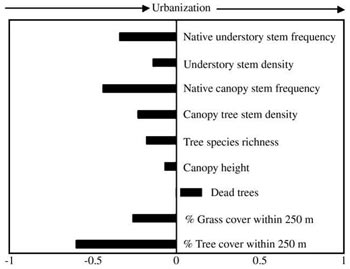 These alterations can contribute to multiple instream stressors, including:

Stream with reduced riparian tree cover and an eroded bank.

Because urbanization often results in riparian alteration, it is difficult to separate the effects of general watershed urbanization (e.g., increased stormflows) on channel morphology from those of riparian alteration. Hession et al. (2003) tackled this issue, using a paired design that considered forested and nonforested riparian reachs on both urban and nonurban streams. 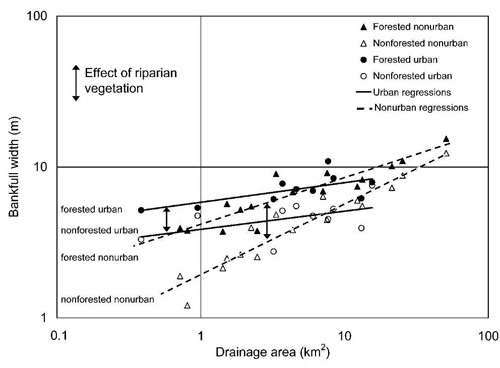 In extrapolating these results to other sites, however, keep in mind that relationships between riparian alteration and channel morphology in urban streams depend upon numerous other factors. These factors include stream size, stream gradient, surrounding geology, and riparian vegetation type. 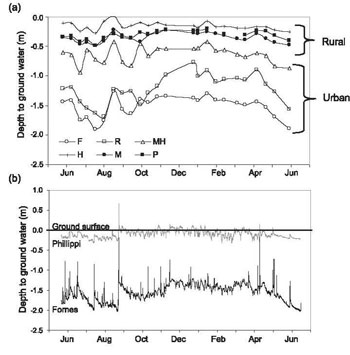 Headwater streams are key habitats in terms of aquatic ecosystem structure and function. They also comprise a significant portion of total stream miles. In urban watersheds, however, these small streams often are filled in or incorporated into storm sewer systems (i.e., piped). These changes alter hydrologic connectivity and physical habitat within the buried streams, as well as urban drainage networks. For example: 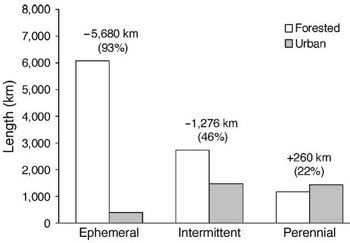 Figure 8. Total ephemeral, intermittent and perennial channel length within Hamilton County, OH for forested vs. urban catchments. Ephemeral streams are channels with distinct stream beds and banks that carry water briefly during and after storms; intermittent streams are channels that carry water during the wet season; perennial streams are channels that carry flow all year. Numbers above bars indicate absolute and % different in channel length between forested and urban catchments.
From Roy AH et al. 2009. Urbanization affects the extent and hydrologic permanence of headwater streams in a midwestern US metropolitan area. Journal of the North American Benthological Society 28(4):911-928. Reprinted with permission. 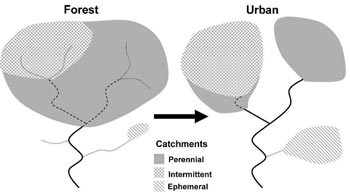