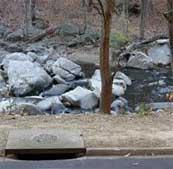 Perhaps the most defining characteristic of urban streams is the increased amount and rapidity of stormwater or surface runoff to those systems. Impervious surfaces associated with urbanization reduce infiltration and increase surface runoff (see Figure 16), altering the pathways by which water (and any associated contaminants) reach urban streams. 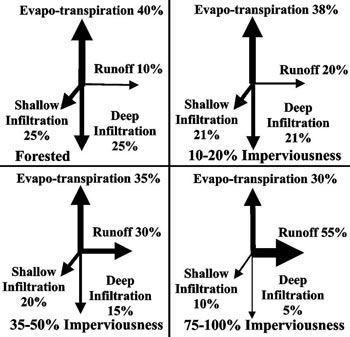 Figure 16. The shift in relative hydrologic flow in increasingly impervious watersheds. Note the large increase in stormwater runoff as imperviousness increases, at the expense of infiltration.
From Paul MJ & Meyer JL. 2001. The ecology of urban streams. Annual Review of Ecology & Systematics 32:333-365. © 2001 by Annual Reviews. Reprinted with permission. 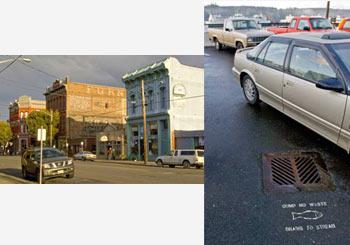 How Does Stormwater Runoff Affect Streams?

The effects of urbanization on stream ecosystems are largely driven by impervious cover. There are two general ways to quantify impervious cover:
Several methods can be used to determine EIA, with varying levels of accuracy (Roy and Shuster 2009). They include:

Many studies have found that EIA (also known as drainage connection or directly connected impervious area) is a better predictor of ecosystem alteration in urban streams. For example, Hatt et al. (2004) showed that % connection was more strongly related to water chemistry variables (e.g., conductivity, total phosphorus) than % total imperviousness, during both baseflows and stormflows (Figure 17).

Total or effective impervious cover has been linked to numerous changes in stream biotic assemblages. These changes include but are not limited to): 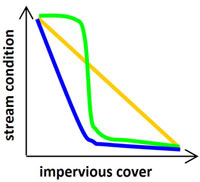 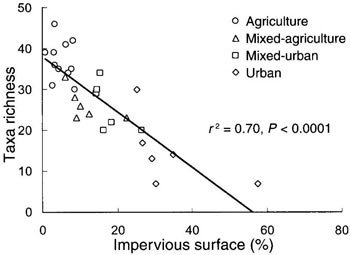 Figure 21. SIGNAL scores (a biotic index) for macroinvertebrates in edge habitats vs. (A) effective imperviousness (EI) and (B) total imperviousness (TI). Solid lines are piecewise regressions, dashed lines are linear regressions; the piecewise regression for EI provided the best fit. Note that the threshold value was 0.07 for EI, approximately half the threshold value for TI.
From Walsh CJ et al. 2005. Stream restoration in urban catchments through redesigning stormwater systems: looking to the catchment to save the stream. Journal of the North American Benthological Society 24(3):690-705. Reprinted with permission.
Example thresholds or critical levels of imperviousness reported in the literature include:
Physical and Chemical Parameters
Biological Parameters