Urbanization has been associated with numerous impairments of water and sediment quality, including: 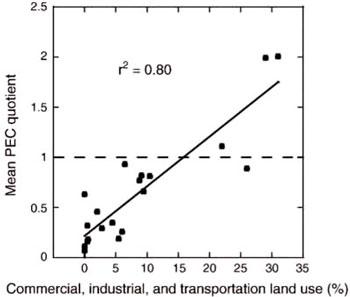 Figure 22. Overall sediment quality, as indicated by mean probable effect concentration (PEC) quotient, vs. commercial, industrial and transportation land use. PEC quotient = contaminant concentration/PEC for that contaminant; at each site, PEC quotients for metals, chlorinated hydrocarbons, and PAHs were averaged to determine mean PEC quotients.
From Chalmers AT et al. 2007. The chemical response of particle-associated contaminants in aquatic sediments to urbanization in New England, U.S.A. Journal of Contaminant Hydrology 91:4-25. Reprinted with permission from Elsevier. 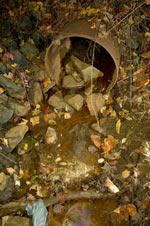 Exposure of aquatic organisms to these pollutants can result in toxic effects specific to each pollutant’s mode of action. The following pages focus on a few urban-specific water and sediment quality issues in greater depth. More detailed information on many of these parameters can be found in CADDIS’ individual stressor modules.

Increases in conductivity or similar measures of ionic strength are among the most consistently documented water quality changes associated with urbanization. For example, Kaushal et al. (2005) examined salinization of suburban and urban streams in Maryland. They found that chloride concentrations exceeded thresholds for sensitive freshwater taxa at sites with greater than 40% impervious cover (Figure 23). In winter, chloride concentrations reached peaks of nearly 25% the concentration of seawater. Concentrations remained up to 100 times higher than at forested and agricultural non-impervious sites throughout the year. 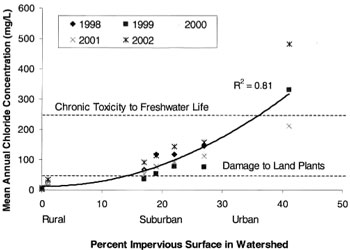 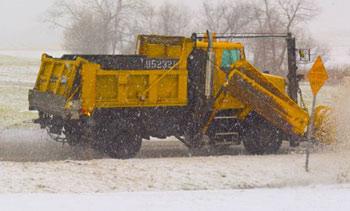 Road salt and other deicers can contribute to elevated stream conductivity in northern urban catchments.

This increase in dissolved solutes in urban streams has been attributed to several sources, including:

Some studies have shown that urbanization-associated changes in conductivity are related to shifts in biotic assemblages. For example:

However, in many cases it is believed that conductivity is a general indicator of overall urban impact, rather than a direct cause of observed biotic effects. 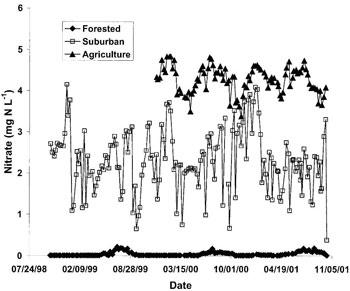 Although nitrogen loading to and export from urban streams typically are elevated, many studies also have found relatively high nitrogen retention [Groffman et al. 2004, Wollheim et al. 2005 (Table 6)] in these systems. Pervious surfaces such as lawns may act as nitrogen sinks in urban areas (Raciti et al. 2008) and help to mitigate at least some nitrogen loading increases. However, this mitigation may be limited as fertilizers often are over-applied in urban systems.

Pavement sealants are routinely applied to parking lots and driveways to protect the underlying surfaces, and these sealants can be significant sources of PAHs. For example:
Scoggins et al. (2007) examined the effect of these sealcoats on benthic macroinvertebrate assemblages. They found that: