Urbanization refers to the concentration of human populations into discrete areas. This concentration leads to the transformation of land for residential, commercial, industrial and transportation purposes. It can include densely populated centers, as well as their adjacent periurban or suburban fringes (see Figure 1). 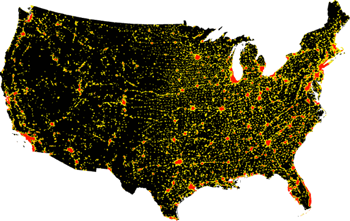 Figure 1. Urbanization map of the U.S. derived from city lights data (2009 data). Urban areas are colored red (represented of larger cities), while peri-urban areas are colored yellow.  Image created by Flashback Imaging Corporation, under contract with NOAA and NASA [accessed 7/16/09].
Urbanization can be quantified in many different ways (Table 1). Example definitions used to classify areas as “urban” or “developed” include:

Why Does It Matter?

Common effects of urbanization on stream ecosystems have been referred to as the "urban stream syndrome" (Walsh et al. 2005a). 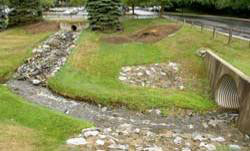 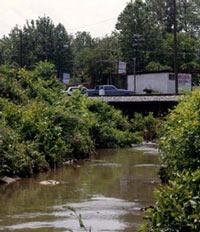 As the urban stream syndrome illustrates, these streams are simultaneously affected by multiple sources, resulting in multiple, co-occurring and interacting stressors. Thus, identifying specific causes of biological impairment in urban streams, or the specific stressors that should be managed to improve condition, is difficult. Some communities are approaching this challenge by managing overall urbanization, rather than the specific stressors associated with it—for example, by establishing total maximum daily loads (TMDLs) for impervious surfaces, rather than individual pollutants.
Many characteristics of urban development affect how the urban stream syndrome is expressed in a given system. These characteristics include (but are not limited to):

Numerous studies have examined relationships between land use variables and stream biota. These studies have shown that urban-related land uses can significantly alter stream assemblages.

Land use variables considered include % urban land (in the catchment and in riparian areas), % impervious surface area (total and effective), road density and other measures of urbanization.

Biotic responses associated with these land use variables include (but are not limited to):

Where urbanization occurs in the watershed can affect its influence on stream ecosystems. Studies examining land use variables and stream characteristics typically consider land use at one (or more) of three general spatial scales:
King et al. (2005) examined whether macroinvertebrate assemblages in Coastal Plain, Maryland streams responded differently to development in the watershed versus in areas closer to the focal site (Figure 3). They found that where development occurs can significantly influence its effects on benthic biota: 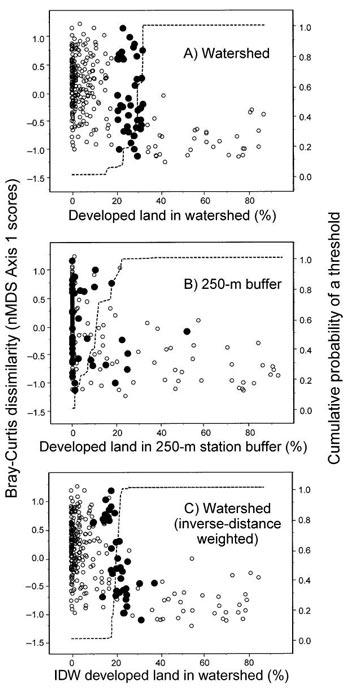