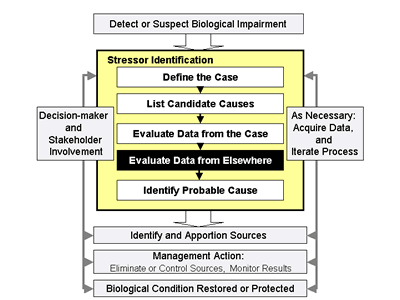 In Step 3, you examined and scored data from the case, eliminating candidate causes from further consideration and diagnosing causes using symptoms, when possible. The candidate causes that remain are evaluated further in Step 4, by bringing in data from studies conducted outside of the case. The evidence developed from this information completes the body of evidence used to identify the most probable causes of the observed biological effects.

The key distinction between data from elsewhere and data from the case is location: data from elsewhere are independent of observations from case sites. These data may include information from other regional sites, or stressor-response relationships derived from field or laboratory studies. They may also include studies of similar situations and other kinds of information. After assembling information, it must then be related to observations from the case.

Questions that Frequently can be Addressed Using Data From Elsewhere

Questions that Less Frequently Can Be Addressed Using Data From Elsewhere

As in Step 3, each type of evidence is evaluated and the analysis and results are documented. You cannot use evidence developed using data from elsewhere to eliminate a particular candidate cause; this evidence is used only to compare the weight of evidence associated with each cause.

Virtually everything that is known about an impaired aquatic ecosystem and the candidate causes of the impairment may be useful for inferring causality. In this step, the investigation is widened by seeking data from outside of the immediate case and analyzing it to generate causal evidence. That evidence is combined with evidence from the case (Step 3), and all the evidence is evaluated and summarized in tables for strength-of-evidence analysis (Step 5).

As stated in Step 3, evaluating the quality of data that have been collected and developed by others presents its own challenges. Although the collection and analysis procedures may have already been set and completed, you still have the responsibility of evaluating whether the data are of sufficient quality to support the current causal analysis prior to analyzing associations.

As in Step 3, data from elsewhere are analyzed in terms of associations that might support or weaken candidate causes. The types of evidence generated from these associations are described in Table 4-1 on this page.

Data compiled from the literature or from regional surveys usually require analyses to produce stressor-response relationships or other associations used for causal analysis. Volume 4: Data Analysis provides further details regarding these analyses.

If you have listed multiple stressors as a candidate cause, the analyses of data from elsewhere should be based on those aggregate causes. For example, if all divalent metals or all polycyclic aromatic hydrocarbons have been combined using a concentration additivity model, then all analyses of associations of that cause with effects should be performed using the sums of toxic units rather than the individual concentrations. This requires that the same method of combining the stressors be applied to both the data from the case and the laboratory or field data from elsewhere.

Types of Evidence that Use Data From Elsewhere

The types of evidence that use data from elsewhere are listed below. The links lead to pages with descriptions and analytical advice. Each piece of evidence should be associated with only one type of evidence, to avoid double counting.

As in Step 3, the associations are evaluated by considering the degree to which they support or weaken the case for a candidate cause. We recommend scoring the evidence using a standard system. These scores are described in each type of evidence's information page, and are compiled in the summary table of scores.

After all available evidence has been evaluated, the degree to which the case for each candidate is supported or weakened is summarized.

Results and Next Steps

At the conclusion of Step 4, the evidence from elsewhere is summarized and you should have two products: