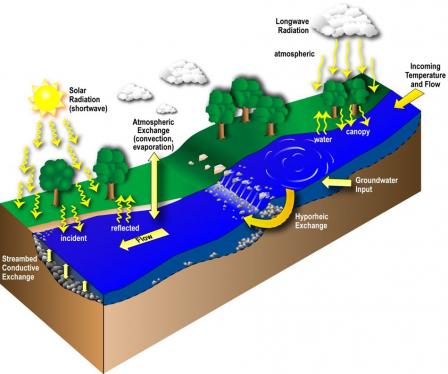 Temperature is the concentration of thermal energy in a substance such as water. The phrase "thermal regime" is used when emphasizing the temporal and spatial distribution of temperature.

Temperatures in streams and rivers are influenced by many atmospheric and hydrologic processes affecting the movement of heat (see Figure 1). In turn, temperature plays a fundamental role in shaping the structure and function of aquatic systems (see Table 1). It is frequently used as a basis for classifying streams (e.g., coldwater, warmwater).

This module provides advice for deciding whether to include temperature in your list of candidate causes. You may go directly to a specific section of interest by clicking on the tabs above.

The checklist below will help you identify whether to include temperature among your candidate causes. The list is intended to guide you in collecting evidence to support, weaken or eliminate temperature alteration as a candidate cause. For more information on specific entries, go to the When to List tab. 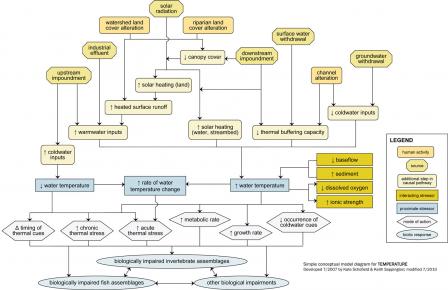 Figure 2. A simple conceptual diagram illustrating causal pathways, from sources to impairments, related to temperature. Click on the diagram to view a larger version.Consider listing temperature as a candidate cause when the following sources and activities, site evidence and biological effects are present:

Sources and Activities that Suggest Listing Temperature as a Candidate Cause

Sources of altered thermal regimes are best evaluated by considering them in context of the atmospheric and hydrologic processes that influence temperature in streams and rivers (Figure 1, on Introduction tab). Dominant sources of heat flux into and out of streams include solar radiation, groundwater input, upstream temperature and flow, atmospheric exchange (via convection and evaporation), streambed conduction and longwave radiation. Additional heat exchange processes not depicted in Figure 1 may be important in specific streams or situations (e.g., friction generated by rapidly moving water in steep-sloped streams).

Some common anthropogenic sources and activities that modify temperature are described below:

Impervious surfaces can rapidly deliver large volumes of warm or cold stormwater runoff (see Figure 6), which can increase water temperatures in the summer and decrease them in the winter (Galli and Dubose 1990).

Impoundments or dams can directly increase or decrease downstream temperatures, depending on the type (i.e., surface or bottom) and timing of water releases (see Figure 8).

Figure 7. Channel alterations may include straightening and widening the channel.Upstream of impoundments, associated hydrologic changes may alter temperatures due to greater stream widths and retention times. In general, discharges from shallow impoundments that do not stratify will increase maximum summer water temperatures. Alteration of upstream and downstream sediment loads also may lead to channel alteration and subsequent temperature changes (Webb and Walling 1993, 1996).

Figure 8. Temperature changes caused by impoundments vary based on design.
Photo courtesy of U.S. Fish & Wildlife ServiceSources and activities that influence temperature can also increase other stressors. For example, removal of riparian vegetation and increased impervious surfaces can result in increased sediments and flow alterations. Increased water temperature reduces the amount of oxygen that water can hold and increases the solubility of many ions. For these reasons, consider including reduced dissolved oxygen and increased ionic strength on your list of candidate causes whenever you include increased temperature.

Site Evidence that Suggests Listing Temperature as a Candidate Cause

Figure 9. Water withdrawal for irrigation.
Photo courtesy of U.S. Department of AgricultureSite observations indicative of temperature change are therefore indirect and largely restricted to observing the presence of one or more sources of thermal modification. For example, because incident solar radiation often has a strong effect on stream temperature, observations of reduced riparian cover over a stream relative to reference conditions may suggest temperature changes. Congregation of coldwater fish near groundwater inputs to streams during summer may indicate suboptimal temperatures outside these zones. Congregation of fish near industrial discharges during winter may indicate the presence of heated discharges.

Biological Effects that Suggest Listing Temperature as a Candidate Cause

Biotic responses to altered stream temperatures are often linked to different spatial or temporal attributes of a stream's thermal regime. For example, timing of fish migration and spawning or emergence of benthic insects may be initiated by gradual stream warming in spring or cooling in autumn. However, increases in maximum temperatures during summer or decreases in minimum temperatures during winter may be stressful enough to cause acute lethality.

Aquatic organisms are believed to be adapted to specific thermal regimes or "thermal niches" to maximize their competitive advantage (Johnson and Kelsch 1998 Beitinger and Fitzpatrick 1979, Magnuson et al. 1979, Hokanson 1977). These thermal niches are reflected when scientists classify organisms in terms of thermal preference (e.g., coldwater or warmwater).

However, water temperatures often fluctuate extensively over different temporal and spatial scales (e.g., diurnally, seasonally, laterally, vertically and longitudinally). Thus, organisms in aquatic ecosystems have developed behavioral and physiological mechanisms to acclimate to or avoid suboptimal temperatures. This can make it difficult to interpret observations of species presence and absence.

Consider including temperature as a candidate cause when you see changes in aquatic community structure or acute biotic effects as described above. Please note, however, that observations of these effects do not confirm a causal relationship, because they may also be caused by other stressors or a combination of factors.

Site Evidence that Supports Excluding Temperature as a Candidate Cause

There are no site observations that specifically provide evidence of the absence of thermal regime changes. General reasons for excluding a candidate from the list are described in Step 2 of the Step-by-Step Guide and in Tips for Listing Candidate Causes.

One-time measurements of stream temperature (called spot or point measurements) can be unreliable indicators of thermal modification. They are best reserved for situations in which the source is highly localized (e.g., point source discharges of heated cooling water). If spot measurements are the only available technique for measuring stream temperatures, care should be taken to control for diurnal variation. For example, measurements should be taken at the same time of day at reference and impaired sites. Measurements also should be made in a variety of habitats within the stream to capture within-channel spatial variability. Table 2 provides some common metrics for stream thermal regimes and their relationship to biological effects.

Water temperature is a key environmental variable for many aquatic biota, and many human-based activities can alter the temperature regimes of flowing waters. Most human activities alter stream temperature regimes through land cover alteration and subsequent changes in the delivery and distribution of heat from the ultimate source – solar radiation.

Figure 2. A simple conceptual diagram illustrating causal pathways, from sources to impairments, related to temperature. Click on the diagram to view a larger version.

In addition to acute and chronic stress effects, changes in extreme temperature values may contribute to increases or decreases in average temperatures, and subsequent changes in the rate of total heat accumulation, a key developmental cue for many aquatic organisms. Water temperature can significantly affect a suite of physiological processes and behavioral characteristics in aquatic invertebrates and fishes, from metabolic rates to activity levels, each of which may contribute to temperature-based biological impairment.

Temperature directly influences the physical, chemical, and biological processes and attributes of aquatic ecosystems. As a result, changes in water temperature and thermal regime can significantly impact the structure and function of aquatic communities.

Figure 11. Example of a detailed conceptual diagram for temperature. Click on the diagram to view a larger version.

The temperature conceptual model diagram (see Figure 11) depicts sources and land use and channel alterations that alter the delivery of heat to streams near the top of the figure, leading down the diagram to steps in the causal pathway, proximate stressors, modes of action and eventually biological responses at the bottom. This narrative generally follows the diagram from top to bottom, left to right.

This temperature diagram is most applicable to wadeable streams. Temperature dynamics in larger streams may be driven by different factors; for example, some human activities included here (e.g., removal of riparian vegetation) will have less impact on larger streams that rely less on riparian trees for shading.

There are a few direct anthropogenic inputs that affect water temperature. For example, upstream impoundments may increase or decrease stream temperatures depending on the type of release (i.e., hypolimnetic vs. epilimnetic), and discharge of heated industrial effluents can increase stream temperatures and affect the rate of temperature change (e.g., causing a rapid drop in stream temperatures during periods of discharge cessation). However, most human activities alter stream thermal regimes through land cover alteration and subsequent changes in the delivery and distribution of heat from the ultimate source – solar radiation.

Altered stream temperature regimes can cause biological impairment through a variety of direct and indirect mechanisms. Acute lethality to organisms occurs when maximum stream temperatures exceed thermal tolerances for a sufficient period of time, or when the rate of water temperature change is so fast that organisms are unable to acclimate.

Chronic thermal stress can manifest in aquatic organisms through a variety of mechanisms, including increased parasitism and disease and changes in behavior or condition. Increased temperatures also lead to higher metabolic rates, and associated increases in energy requirements; if increased energy requirements are not accompanied by increased food intake, then organism health and fitness can be impaired.

The timing of temperature changes also is of critical importance to the ecological health of aquatic ecosystems. For example, developmental and reproductive cycles of many species are closely tied to seasonal changes in stream temperatures and/or the rate of heat accumulation in the stream.

Changes in timing of such thermal cues, due to either increased or decreased temperatures, can alter the timing of insect emergence, fish migration, and other activities, disrupting natural life cycles and predator-prey relationships. Any of these direct or indirect temperature effects can contribute to biological impairment of aquatic communities.