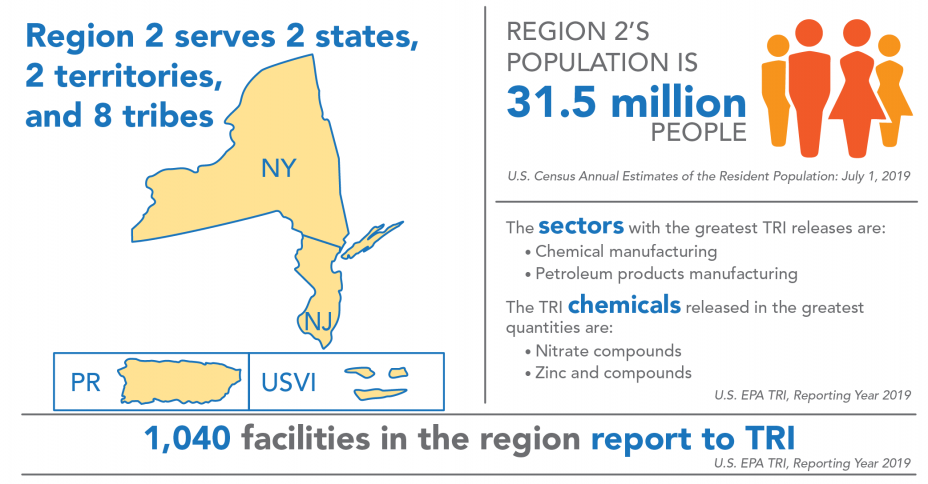 Region 2 covers 10% of the U.S. population and includes 5% of all facilities that report to TRI. For state- and tribe-specific TRI data, see the Where You Live section and the Tribal Communities section. Although Region 2 includes 8 tribes, no facilities located on tribal lands in the region reported to TRI for 2019.

This chart shows the industry sectors with the most TRI-reporting facilities in Region 2.

For information on the Region 2 facilities with the largest releases, see the TRI Region 2 TRI factsheet.

production-related wasteThe sum of all non-accidental chemical waste generated at a facility. It is the sum of on-site environmental releases (minus quantities from non-routine, one-time events), on-site waste management (recycling, treatment, and combustion for energy recovery), and off-site transfers for disposal, treatment, recycling or energy recovery. by facilities located in Region 2. For more details on quantities released, toggle to the Releases graph.

Note: For comparability, trend graphs include only those chemicals that were reportable to TRI for all years presented. Total production-related waste managed reported for 2019 in Region 2 was higher than shown here due to large treatment quantities of hydrogen sulfide, which was not TRI-reportable until 2012.

The following graph shows the annual quantities of TRI chemicals released by facilities located in Region 2.

Variability in TRI chemical releases in Region 2 is due to changes in releases reported by hazardous waste management facilities, where release quantities can vary widely year to year.