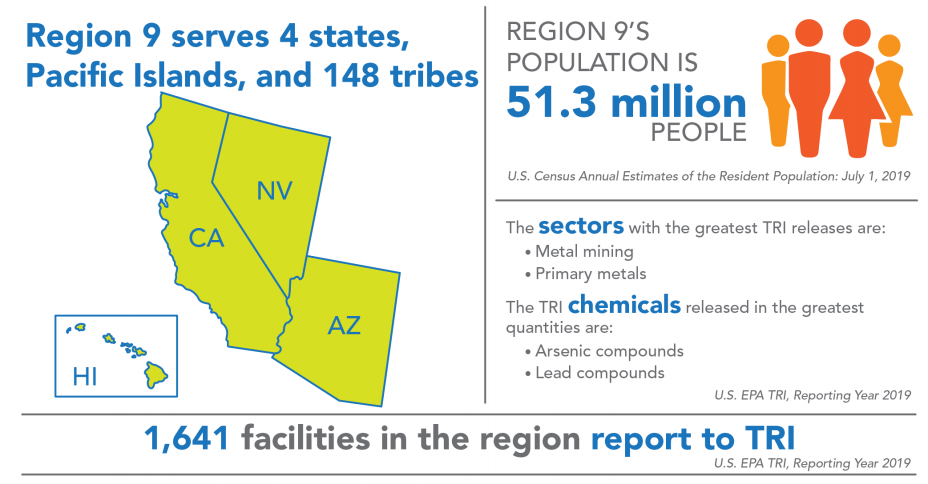 Region 9 covers 15% of the U.S. population and includes 8% of all facilities that report to TRI. For state- and tribe-specific TRI data, see the Where You Live section and the Tribal Communities section. Thirteen facilities located on the land of six different tribes in Region 9 reported to TRI for 2019.

This chart shows the industry sectors with the most TRI-reporting facilities in Region 9.

For information on the Region 9 facilities with the largest releases, see the TRI Region 9 Factsheet.

production-related wasteThe sum of all non-accidental chemical waste generated at a facility. It is the sum of on-site environmental releases (minus quantities from non-routine, one-time events), on-site waste management (recycling, treatment, and combustion for energy recovery), and off-site transfers for disposal, treatment, recycling or energy recovery. by facilities located in Region 9. For more details on quantities released, toggle to the Releases graph.

The following graph shows the annual quantities of TRI chemicals released by facilities located in Region 9.

42 metal mines in Region 9 reported to TRI for 2019, more than in any other region, accounting for 78% of the region’s releases. Most of the mining releases were reported by gold mines in Nevada.

In 2019, 6% of facilities in Region 9 (105 facilities) reported implementing new source reduction activities. Source reduction reporting rates in the region were among the highest in the electrical equipment sector, in which 22% of facilities reported at least one source reduction activity. For example, an electrical equipment manufacturer replaced a wave solder machine with a new selective solder machine that helped reduce the amount of lead used in the process. [Click to view facility details in the TRI P2 Search Tool].